I have been hesitant to write much, if anything, about the current climate and state of our public lands. However, as a photographer I feel it is important to say something; these are lands that I use to explore, photograph, and seek solitude which I am sure many other photographers also do. It seems that in the last year, and even before that, some of America’s most treasured lands have come under attack in an effort to begin drilling and extracting resources below and within these beautiful places.

Two of the biggest areas that have been discussed are Bears Ears National Monument and Grand Staircase Escalante National Monument in Utah… and for good reason. I have been fortunate to spend a bit of time in both monuments over the years and have grown to greatly enjoy my time spent in these wilds. Narrow twisting canyons and remote sandstone arches along with almost an endless amount of ancient ruins and archaeological sites make these two areas a nature photographer’s (and any other adventurer’s) playground.

An ancient pueblo tucked in an alcove high above a canyon wall in Bears Ears National Monument.

Bears Ears National Monument is to be reduced by a staggering 85 percent from it’s original proposed boundaries while Grand Staircase Escalante National Monument is to be reduced by 46 percent. These reductions will exclude some of the most scenic areas from these protected areas. In Bears Ears, it is the oil beneath which has become the reason for this reduction. In Escalante, it is coal deposits on the Kaiparowits Plateau. While the boundaries have been reduced, there will be legal battles for the foreseeable future in regards to these reductions.  As a photographer who uses these lands to create images that I may sell as fine art prints, or license to companies, or perhaps run a workshop in, it is very important that they remain intact.

Aside from the political aspect of this and no matter what views you have, if you are a photographer who enjoys spending time in our public lands, this should be of great importance to you.

Our national parks and monuments are some of the most photographed locations on earth. Within these areas are vast wilderness areas that indeed need to be protected for future generations to explore and enjoy. Ancient cliff dwellings and rock art that have been around for hundreds to thousands of years should be protected.

Imagine your most beloved location – a place you enjoyed photographing or exploring – becoming closed off so they could drill and rip apart the beautiful landscape for the oil or coal. It has happened before and will likely happen again  if enough people don’t speak out against such things. It is important now, more than ever, to make our voices heard. These lands belong to us, hence those signs you see that read “your public lands”. We should have a say in how they are managed. 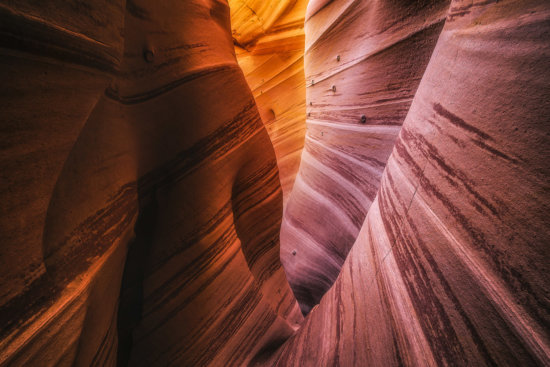 One of many twisted and photogenic slot canyons in Grand Staircase Escalante National Monument.

I know one of the most popular areas of the Grand Staircase, the area surrounding Hole in the Rock Road, is set outside of the new boundaries of the monument. Many friends and colleagues run photography workshops out here and depend on this area to guide and teach other photographers. This particular area has some of the most spectacular sandstone formations and slot canyons in all of the southwest and attracts photographers from all over the world.

There are talks about turning this area into a national park, but I cannot see that happening. I would hate to see this place overrun with tour buses and RV’s. For those not familiar with this area, the main road is a moderately wash-boarded dirt road with many side tracks that branch off to various areas and it’s not practical for large vehicles.

While I am all for people visiting these locations, I don’t feel it should be easier to access. Paving the roads and adding more facilities would encourage far more people to visit. Part of the reason many enjoy this area is because it takes some effort to get out there; you are more likely to find solitude and be away from the crowds. There are some areas that have become much more popular over the years and you are more likely to run into other hikers and photographers in the more popular spots.

One thing that has also been happening more often than I would like is graffiti. It seems within the last year this has become a much larger issue with the influx of tourists. It must be monitored by all of us in the field, not just rangers. During recent visits to both Bears Ears and Grand Staircase I have encountered graffiti on the sandstone walls of slot canyons as well as mixed in with the ancient rock art. It truly is a shame that others cannot respect these places and keep them beautiful.

If you see suspicious behavior, say something. Be sure to get as many details as possible of the incident and, if you can, explain leave no trace principles to those who don’t have a clue. I noticed that in a number of BLM visitor centers you can get cards with the Leave no Trace principles to remind us. We all should be able to enjoy OUR PUBLIC LANDS. 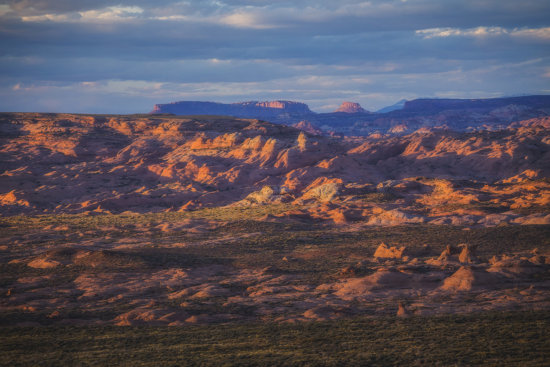 An overview of the typical landscape seen off Hole in the Rock road in Grand Staircase Escalante National Monument.

If you would like to learn more about the issues regarding the two monuments mentioned above and how you may be able to help, please visit http://gsenm.org/ and https://www.friendsofcedarmesa.org/

Stephanie
Being Creative with your Wildlife Photography