You can create a three dimensional feel for your landscape photography composition using number of different perspective. The better you understand them, the easier it is to incorporate them in making compelling landscape photos.

Linear perspective is often referred to as a vanishing point because parallel lines tend to converge the farther away they go. A common example of this is a road seeming to converge to a point at the horizon. An even better example is the cliché of the railroad tracks seeming to converge in the distance. This convergence is recognized by our brain to interpret as distance.

Often this can be used to lead the viewer’s eye toward an area of interest. The edges of the road and the fence posts in this image (image #1), when thought of as geometric objects, are essentially parallel lines. They act as leading lines to draw the viewer to the distant horizon and toward the meteor clusters. 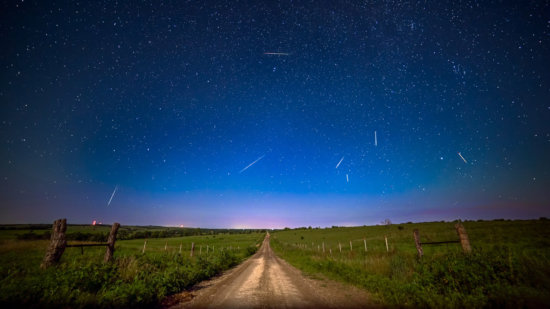 Diagonal lines can be quite powerful in a landscape photography composition. Notice in the image of The Second Wave in Arizona how the diagonal flow of the sand lead to the storm and distant formation. 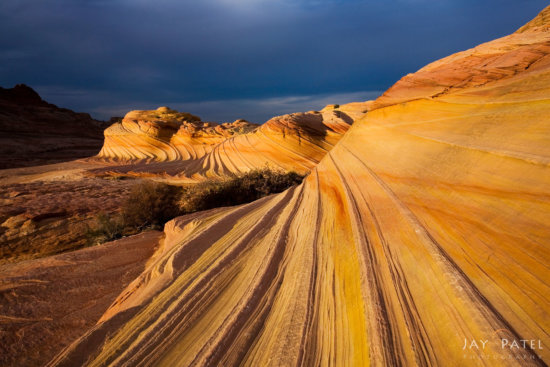 Height perspective is akin to linear perspective except, rather than horizontal to the ground and vanishing in the distance, the vanishing point is on a vertical plane. If you lay at the base of a tall tree or a tall building, they appear to grow smaller, or converge, the higher they are. Again, as in linear perspective, the lines lead the viewer toward an area of the image. In the case of the image looking upward inside an aspen grove, the tree trunks are lines converging verticals at a point of blue sky just to the lower right of center (image #3, courtesy of Jane Palmer). In using both linear and height perspective, the viewer’s eye is kept, even trapped, within the image. 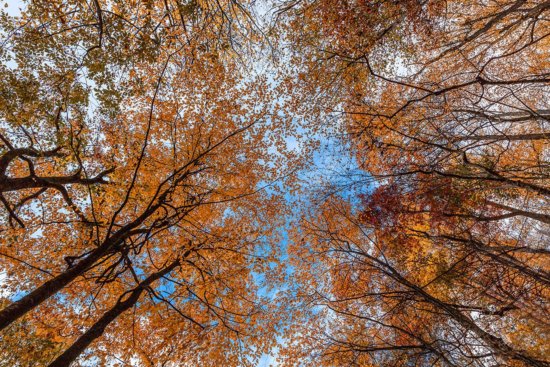 When objects appear on the same visual pane, those closer to the camera overlap and partially hide those that are further away. This is a visual cue that the overlapped objects are more distant. You may think this is rather obvious, but it still represents how our brain judges the spatial relationship.

The atmosphere is loaded with all types of particulates including moisture, smoke, haze, dust, etc. The effect is that, as objects appear in the distance, they become less clear, colors muted. Objects of similar color are lighter in tone. You can use both the understanding of how overlapping and atmospheric perspective work together to enhance the illusion of depth in your composition. 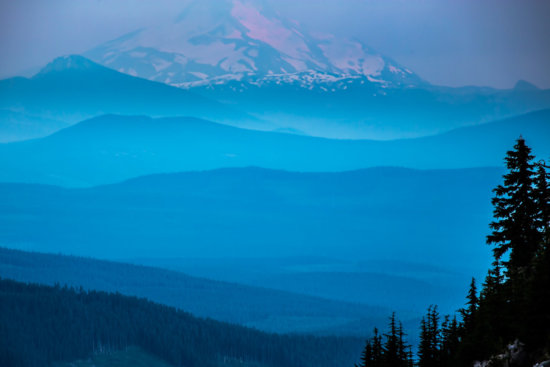 This type of perspective is, when you have two objects of the same size, the one closest to the camera appears larger. I further address this perspective in a moment. (Image #5) 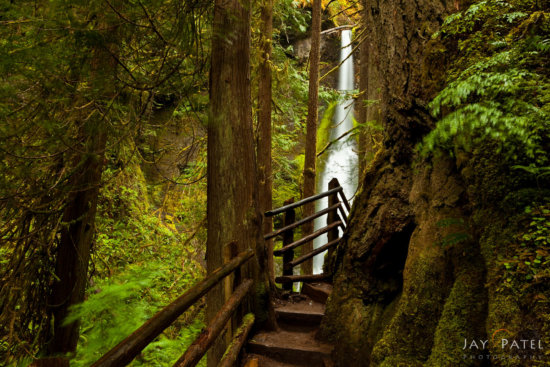 Forced perspective, which makes a larger distant object appear closer, is often used to create special effects in photography. For example, you have probably seen this in images of someone appearing to hold up the Leaning Tower of Pisa with their finger (or other similar novelty-motivated images). However, you can also use forced perspective in conjunction with diminishing size perspective to your advantage in landscape photography. Let me explain…

When we approach our composition using these as tools, we can be quite successful at creating a feeling of depth in an otherwise two-dimensional image, better holding the interest of the viewer. (Image #6) 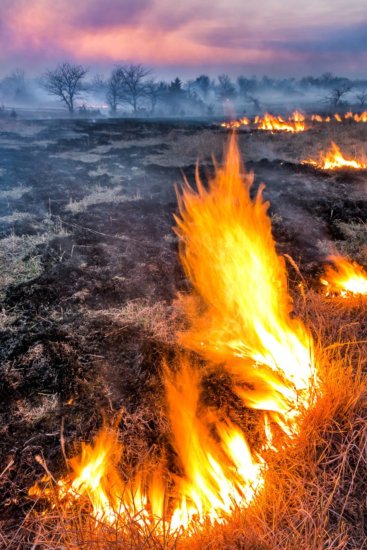 My experience in 4×5 work helped me understand and take advantage of the ability to make a foreground become, not just a foreground, but a key element in the composition, conveying both depth and context to the image. To most effectively achieve this, I get very close to the foreground with a wide-angle lens. This exaggerates its size in relation to other elements in the composition. I tell my workshop students at times that, if you think you are close, get closer. (Image #7) 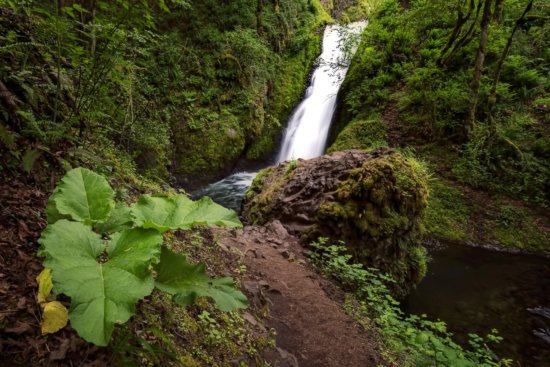 When taking advantage of the forced or diminishing size perspective, I do one other thing. I tilt my lens down at an angle, much like you would using the features of a 4×5 camera or a dSLR with a tilt/shift lens. By doing this, I can get closer or achieve the effect of further exaggerating the relative size of the foreground.

Now, some would say you should keep your sensor parallel to your subject to avoid unwanted issues with linear perspective, where parallel lines tilt outward and look unnatural. I’ve been with photographers who went to great lengths to make sure their focal plane was parallel to the subject’s plane to avoid perspective distortion. In many cases their resulting image failed to have its potential impact.

While parallel perspective distortion can be an issue, particularly when elements of architecture are involved, it is most often unnoticeable in typical landscape compositions, unless of course your subject includes tall straight trees or  similar objects. Even then, there are tools in Lightroom and Photoshop to help correct minor perspective distortions.

In addition to exaggerating the foreground element, there is another reason to consider tilting your fixed wide-angle lens to the advantage of the composition. When you do this, you are shifting the lens plane and somewhat adjusting the plane of focus to run more parallel to the ground. This is called the Schelmpflug principle. This principle states that, when the extended lines from the lens, object, and film plane intersect at the same point, if the lens plane is tilted down, the entire subject plane is in focus. 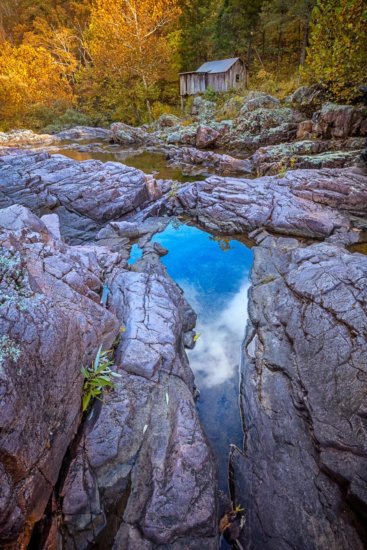 The use of this technique can both exaggerate the foreground and provide the illusion of great depth of field. The only limitation is, if there are some vertical elements that extend above the tilted focus plane (such as nearby tree trunks), you cannot focus on them while keeping the ground plane in focus. Being aware of this helps when taking advantage of the Schelmpflug principle.

When I see a landscape subject I wish to photograph, I immediately look around for an interesting foreground to include. But it also works the other way. If I find a very interesting element that could be used as a foreground, I explore how I can use it in the larger landscape to tell the desired story.

Next time you’re out, play with that wide or ultra-wide angle lens. Get close, then get closer. Work the
subject. You may find yourself pleasantly surprised with the result and may even modify your whole
approach to landscape subjects.

LEARN MORE ABOUT PHOTOGRAPHY COMPOSITION
Check out the following tutorials on Visual Wilderness:

I am a fine art black and white landscape photographer born in 1951 in Jacksonville, Florida. My photographic interests began in the early 1970’s. Over the years, I emersed myself in black and white photography after build-ing my own darkroom in my home basement.

I tell people I am largely self-taught and a slow learner. In essence, I am still evolving and growing. Early influ-encers were icons such as Ansel Adams, Brett Weston, John Sexton and the color greats Elliot Porter and David Muench. Each contributed in some way to my creative development. In 2006 I made the transition to digital capture, thereupon focusing mostly on color landscapes.

Two years ago, I had become weary of much of what I was producing in color, as well as the direction I felt land-scape photography was going. Consequently, I almost quit photography altogether. But then it occurred to me that maybe I had just lost my way.

Fortunately, I listened to an inner voice telling me I needed to revisit my black and white roots. I came to refer to this as returning to the cradle. With renewed passion, I am now producing work with which I feel a greater connection, and which offers more freedom of expression.
I currently reside in Kingsville, Missouri. Selections of my work exist in private and corporate collections. In 2016 the National Park Service highlighted my work as part of their centennial celebration and now have several large prints of my work on display in a Missouri regional park headquarters. I recently received recognition in Black and White Magazine, Black Box Gallery, Monovision Photography Awards,

Craig currently hosts workshops and seminars in Missouri and Kansas, as well as several in the Northwest, including the Oregon coast and the Grand Tetons in Wyoming.

How Focal Length effects Perspective in Photography
Scroll to top