In landscape photography, perspective correction is a warping or transformation of an object and its surrounding area that differs significantly from what the object would look like in camera vs. a normal focal length at 70mm. Perspective corrections and warping ride a fine line between digital art and reality. I sometimes feel really uncomfortable warping or changing the perspective on a mountain or sand dune. I want to keep my photography as close to reality as possible and I’m not sure if plumping up a sand dune is ethical. When does your image become digital art vs. what is actually in front of your face? I tend to lean conservatively when it comes to these types of adjustments and corrections.

Here are some post-processing tips for perspective correction in Photoshop and Lightroom:

Mountains in the left image are distorted in post-processing. The right image is the original.

In the realm of landscape photography, we are typically shooting a scene ultra wide. I’m usually around 16mm when I’m out shooting in nature. It’s important to keep in mind that 70mm is the focal length that is actually what we see with our own eyes. Objects at 16mm are smaller than they are in real life. So those big booming mountain ranges look less than dramatic at 16mm. Herein lies the argument where warping something is acceptable. Stretching up some mountains and sand dunes in post processing just a little in the background is one reason to warp. The other is creating digital art for the wow shock effect. Over exaggerating too much isn’t what is in front of your lens. Finding the fine line between the two in post processing can be really tricky as it relies on your personal preference.

The left image is original. The right image has perspective correction applied to the sand dunes in post-processing.

I do my slight warping adjustments through Photoshop. Here’s how I do it:

Here is where you create grid boxes over the entire image while the Layout button is selected. I usually select the one area that I want to warp first. 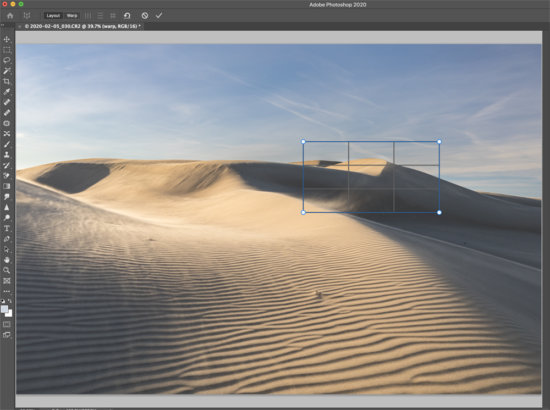 Keystoning is something I really have to deal with when shooting architecture and real estate. I’ve also seen it pop up every once in a while when photographing vertical lines, such as a grove of trees. The trees can appear to lean towards the center or edges of the image. This can be easily fixed by either a simple lens correction or transforming the vertical or horizontal lines back to parallel.

In Adobe Lightroom under Lens Corrections, make sure that the box for Enable Profile Corrections is checked. This makes automatic adjustments to lens distortion and vignetting. The distortion correction fixes a bit of the keystoning effect.

Sometimes it is not enough. In this case you can go under the Transform section and either click auto or make manual adjustments to the perspective by changing the vertical and horizontal adjustments. The downside to this is having to crop out some of the information on the edges of your images. You can do this automatically by clicking on the Constrain Crop box.

In conclusion, perspective correction is OK in moderation. I find over-exaggerated mountain ranges to be a distortion on reality. Keystoning correction is pretty critical in getting your vertical lines straight and is quintessential in architecture and real estate photography. I also use it to get my vertical lines straight in landscape photography.

How do you feel about perspective wrapping for landscape photography to be larger than life? Please comment below.

Lace is a full-time freelance photographer. She grew up in the farm town of Templeton, CA and majored in Graphic Communications. She started taking basic photography classes in 2008, and discovered her passion to create and be outdoors. She spent 8.5 years living on the island of Kauai, and moved to Utah at the end of 2020. When she doesn’t have a camera in hand you can find her hiking, camping, climbing, and playing sports.

How to choose correct White Balance for Nature Photography

4 Post-Processing Mistakes Made by Beginners

Do your nature photos have enough details?

How to Photograph Bright or Dark Nature Photography Subjects