As time passed I discovered that landscape photography composition is lot more than just following the rules. Rules of composition form the foundation for creating impact in your landscape photos, but you have to go much further than that to capture stunning images that makes your viewers go “WOW! I wish I had taken that.”

Creating impact with landscape photography composition requires you to build a photo around the subject. Here is how I go about building a photo around my subjects:

Let suppose that you are off on a grand landscape adventure on the Big Island of Hawaii and you happen to stumble upon a scene like the following one. At first you’ll likely be overwhelmed by everything that is going on. The sight, the sound, the smell, and all the other senses will compete for your brain’s attention. At this point, you have to take a step back and reflect on what you want to photograph and define your subject matter. In this case, it was clearly the lava flow. Your first thought likely is to use the rules of composition to improve this photography composition; place the horizon at the rule of the thirds. If you did, you may end up with something like this: While the sky and horizon line in this image give a more pleasing appearance, they also create other problems with your photography composition. The subject matter now occupies a tiny portion of your frame and starts to compete with the gorgeous light in the sky. The foreground to the right of the frame is out of focus. And you’ve introduced more dead space such as dark rocks and ocean that, although it provides a sense of place, does little to enhance your subject matter.

The answer is actually pretty simple. When I approach photography composition, I start out by defining my subject and then I build a photo around it. Once I define my subject, I used the elements of composition such as light, textures, contrast, and the rules of composition to draw the viewers attention to my subject. But I don’t stop there. I work within the limitations of my equipment and I select the correct camera setting to add to the subject. I also make sure to avoid distracting elements and dead space so that the subject clearly stands out in my photos. And sometimes I have to break the rules of composition to accomplish that. 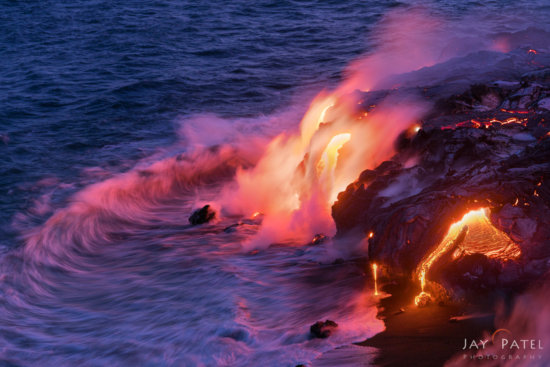 Using this approach, I was able to create an image that really makes my subject (the lava flow) clearly stand out. Here are few decisions I made that helped me choose the right composition to create this stunning image:

One can argue that I got lucky with finding a lava flow that I was able to reach with my 200mm lens. What if you can’t reach your subject due to equipment limitation? So lets take an example of how to build an exceptional photography composition when a 200mm lens is not long enough to capture the subject matter.

Building a photography composition with Puffins

One of the best things about going to Iceland during the summer is to be able to photograph the gorgeous puffins. But as you all know, birds are difficult to photograph because you need a really long lens to catch them. In Hawaii, a 200mm lens was long enough to reach the nearby lava flow and build a photo around my subject. But this was not the case in Iceland. My first attempt to photograph the puffins with a 200mm lens on a crop body resulted in images that looked like these. 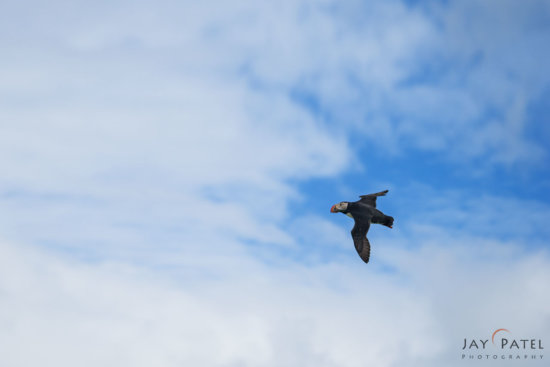 The photo follows several rules of composition: the puffin is flying looking into the frame, it’s placed according to the rule of the thirds, it’s a simple image that makes the subject stand out, and I managed to avoided distracting elements in the background. And yet the image fails to create impact.

The main reason for a lackluster response to this image is the fact that the image is NOT built around the subject… rather it was created by only following the rules of composition. You need to step back and ask yourself, “Why do I love to photograph the puffins?” Because the puffins are beautiful birds with colorful beaks and a striking black and white patterns. My longest lens on a crop body failed to capture the features of the puffin that make them so appealing to photograph.

So my next step was to go puffin hunting (with a camera) to capture those striking features. For that to happen, I needed to get up close to them. The only way I could do that with my equipment limitation was to find some puffins sitting on the ground. My attempt resulted in this image.

But they would fly away before I had a chance to get close enough to photograph them. Additionally, the foreground was unappealing. This left my image with lots of dead space.

My next step was to use tall grass and other low growing vegetation to conceal my approach. Once I got close to the puffins, I selected the composition to include the vegetation in the foreground to hide the bird poop. And using a shallow DOF, I was able to blur out the foreground so that my subject stood out.

As you can see, I built my photo around my subject and selected the compositional elements (foreground vegetation, clean background) around my subject to create impact. Additionally, I followed the rule of thirds and placed the bird so that it is looking into the frame.

This process of building your photograph around your subject is what our Creating Impact Course is all about. We go beyond the basics by helping you understand how to use different elements of composition (colors, contrast, textures, negative space, and more) and camera settings to capture photos with visual impact. Our Creating Impact Course was filmed entirely in Iceland and includes in-depth case studies that demonstrate how to build your photograph around your subject matter.

LEARN MORE ABOUT PHOTOGRAPHY COMPOSITION
Check out the following tutorials on Visual Wilderness:

How to build a Photography Composition around your Subject

Why Use Foreground Elements in Your Photography Composition