I was eager to try out the Sony 70-200 F4 telephoto lens sent by BorrowLenses to capture the brilliant details of these beautiful sea urchins. When I first saw them I thought, “No problem. I’ve photographed things under water before so this shouldn’t be a problem.”

No sooner had I looked through my view finder when I realized that this was not going to be as easy as it looks. I soon came up with a set of problems that I had not faced before. Here is how I went about tackling each problem…

My first attempt to photograph sea urchins was focused on a group of  three that formed a nice triangle. When I tried to shoot the urchins, I realized that there was no way I could get the images sharp. When I zoomed in close, I realized that the light was diffracting and creating rainbow-like halos. You can see these in the images below.

I tried several potential solutions… different shutter speeds, different angles, waiting for the water to be still, even focusing manually… but nothing seemed to work. The halos were still a problem. I stepped back to consider what was causing these halos and I realized that the bright sun combined with the current position of the sea urchins in front of a bright background was creating a prism effect with reflected light. This effect was the cause of the halos.

The solution: I needed to find a different sea urchin and use a different perspective. I found one in shallower water surrounded by a darker background. In this environment, reflected light would not be a problem. Because the sea urchin was in shallow water, I was able to shoot it directly from above which then put the sun behind me. This minimized the softness created by these rainbow halos.

Photographed in shallow water with sun behind me

Second Problem: Getting Everything Sharply in Focus

I wanted to fill my frame with the sea urchin and a Sony’s 70-200 F4 Lens allowed me to do that by getting within 2-3 feet of it when used with a crop sensor body (Sony a6300). However, the DOF was very narrow. To make matters worse, this urchin was constantly moving its tentacles. I needed to select small aperture and high shutter speed to get everything sharply in focus. The question was, what is the correct value of aperture that I needed? 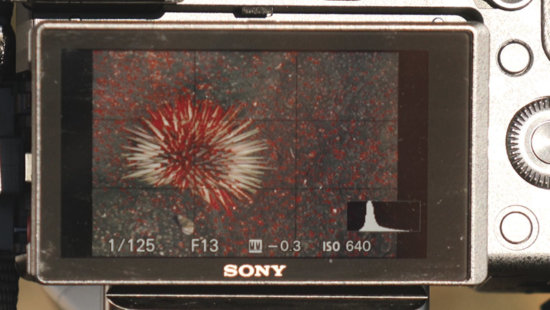 The solution: I turned on my camera’s focus peaking function to determine exactly what areas of the sea urchin were in focus. I then adjusted my aperture to ensure that the entire sea urchin was in focus as indicated by the Red Focus peaking indicators. Once I knew the aperture, I selected the shutter speed to be 1/13s (sea urchin was moving slowly) and an ISO of 640 to get proper exposure.

So, this is an important lesson… when you’re out in the field, there is no one formula that provides the solution to every problem. Even if it’s something that worked in the past, this is no guarantee that it will work again. Out in the field, you must be able to think and figure out how to get around each problem. Field work is a great place for out-of-the-box thinking.

How to Create Clean Backgrounds in Macro Photography