In June of last year, I wrote an article stating that the most valuable piece of photography equipment you’ll ever own is your brain. If you use it properly, you’ll be able to capture great images with just about any camera including your iPhone camera.

Just a few months later, I was forced to put this claim to the test. While visiting my mom in Golden, Colorado I looked out the window and saw a truly incredible sunset. Since I didn’t have my DSLR cameras with me, I grabbed my iPhone and began taking photos in her backyard.

I had almost no experience shooting with my iPhone. I take almost all of my shots on my regular camera. So I just started shooting in whatever default setting it was in. Quickly, I learned that one of the biggest limitations for an iPhone for landscape photography is that the effective (35mm equivalent) focal length of its lens is around 30mm. While this is fairly wide for images of people, you’ll often want a much wider lens for big landscape photos. 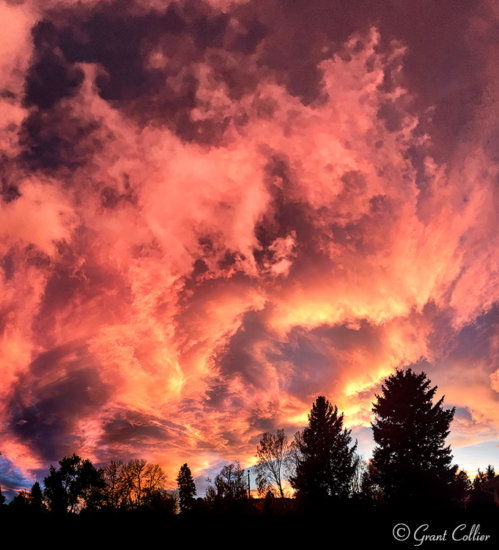 I took 46 images on my iPhone camera to capture this 136 megapixel image.

The sunset I was shooting filled the entire sky, so I knew I wouldn’t get a very got shot with a single exposure. I instead started taking many images of small parts of the scene that I would later stitch together. I avoided using the auto-stitch option on the iPhone. To do this, you have continually move the camera while it is taking shots, which will produce some blur in the image. You also can’t take multi-row images of even larger scenes using this feature. 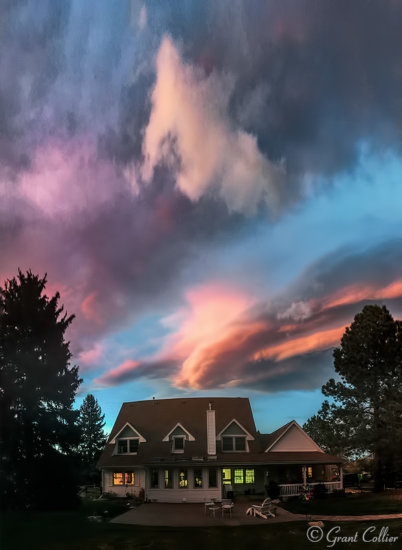 The sunset filled the entire sky. So I took this image while facing in nearly opposite direction from the previous image. It is 82 megapixels.

Normally when stitching images, you want to shot in Manual and keep your camera settings the same for all your images. Unfortunately, you can’t do this with an iPhone camera. The shutter speed and even color balance will change from shot-to-shot. I had to hope that modern stitching software would fix this when processing the files. Fortunately, the stitching software did a great job. I recommend first trying Adobe Lightroom to stitch your images. If this doesn’t work, you can try other programs, like Image Composite Editor, which is a free program for PC users.

One great thing about stitching images with an iPhone camera is that it not only gives a much wider field of view, but it also gives you much larger, higher-quality images. The images I captured ranged from 70 to 136 megapixels in size. Since I was shooting in low-light, the individual, 12 megapixel images were quite noisy. While the stitched images still have noise, you have to zoom in a lot farther to see it. So one can print the images at much larger sizes. I’d be comfortable printing these images up to about 30” on the short side. 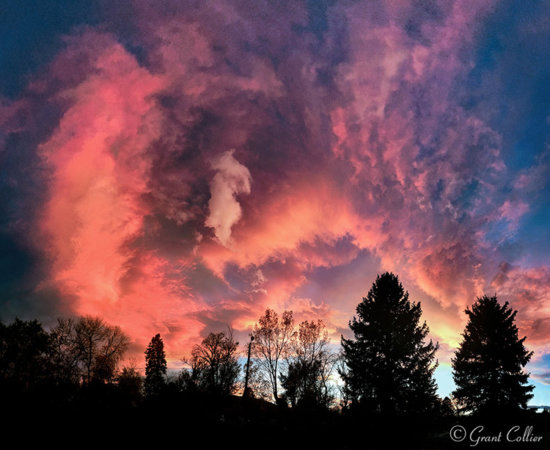 The clouds changed so fast. By the time I capture one compete image, there was a different scene waiting to be photographed.

While I was quite happy with the results, I’m not planning any extreme cost-cutting measures by selling all my camera gear and using only an iPhone. There are still obvious limitations to an iPhone camera. For example, some limitations include noise, pixel count, lack of control over camera settings, and a single, fixed lens. I do believe that 90% of an image depends on composition, lighting, and post-processing. Therefore, 10% depends on the camera. But for a professional photographer, that 10% can still make a very big difference. For a hobbyist, you should be confident that you can capture great images on an iPhone or any camera. This is especially true if you study photography and fully-engaging your brain.

I should add that there are accessories and apps for iPhone cameras. They can allow to add a longer lens or manually adjust the shutter speed, aperture, and ISO. If you are interested enough in photography to consider buying any of this, I recommend instead getting a low-cost DSLR camera. These cameras will get superior results to an iPhone and probably won’t end up costing much more than the accessories for the iPhone. 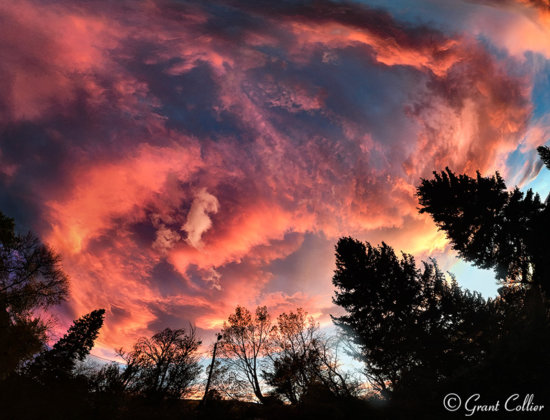 This is actually the same image as the one posted above. I just used different options when stitching the image. This option gave it the look of an image taken with a fisheye lens.

While I used the iPhone camera when I had no other options, I don’t see myself ever using an iPhone because it is the best tool for the job. However, there are some other small point-and-shoot cameras that I own specifically for shooting in special circumstances. One is a GoPro camera with a dome. This camera allows me to inexpensively take over/under water shots anywhere there is a clear body of water. Another small camera I use is the one on my DJI Mavic Quadcopter. Since I now have a commercial drone pilot license, I use this camera to get images from unique vantage points from the air. I will discuss using both of these basic cameras for such purposes in the next two articles.

When Should a Landscape Photographer Go Pro?

An Important Lesson for Landscape Photographers
Scroll to top