Look at the two photos below. We arrived at Chanticleer overlook (Portland Women’s Forum) as the clouds began to change color. A rainbow appeared over the beautiful, sun-drenched Crown Point in the distance. The last rich, red light was still falling on the mountains. I grabbed my camera, vaulted myself onto a low stone wall, and set up my tripod in record time. I managed to snapped the photo just in time. Less than two minutes later, the scene had changed dramatically. The sun was no longer painting Crown Point, the rainbow had faded, and the colors in the sky were almost gone.

Almost Did Not Happen

When we arrived at St. Mary’s lake overlook in Glacier National Park, all we could see was heavy overcast skies. There was only one other photographer waiting to photograph this location and all of us decided to head back since there was no chance to shoot any colors. As we were headed back, we saw this deep red glow on the horizon, turned the car around, and got back in time to capture one of the most spectacular sunrises I have ever witnessed. I had photographed Mesquite Dunes in Death Valley many times, but never in middle of a sand storm. On this particular day, I clearly did not know what to expect as I huddled behind some bushes in the low lying area trying to protect my gear and myself from the 25-35 mph wind gusts. The sand hitting my face felt like someone was trying to give me a shave. After waiting for about 45 minutes, I saw the sunlight pouring through the clouds. I grabbed my camera and raced up the nearest dune to capture this image. I had to bury my tripod deep in the sand to keep the camera stable. The light lasted for about two minutes before vanishing and by the time I got back to my car, my tripod, camera and rest of me was covered in sand. 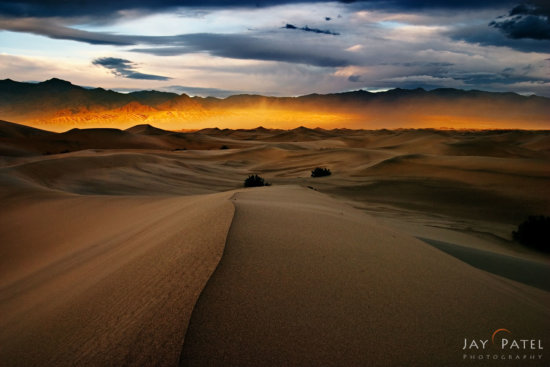 Sometimes the fleeting moments are so short that you don’t really see them with your eyes… but you can catch them in the photograph by freezing time. Below is an example of one such fleeting moment during our workshop in Yellowstone National Park at the Artist Paint Pots. Once the students saw this image on the back of their camera they were also hooked and spent the next two hours capturing hundreds of photos of the mud pots. We do our best to be prepared for this kind of light. It’s not easy and sometimes we miss it entirely. But with a little luck, a bit of research, the right skill set, and the correct gear, we have managed to capture more than our fair share of these fleeting moments in nature. And these fleeting moment are worth it!

Tips for Getting Started in Travel Photography

Tips for Photographing Lava – Part I
Scroll to top