I’ve been in helicopters over the Namibian desert and shoreline but on both of my rides I was unable to produce great images. I shared the first ride with two other people and we shot from different sides of the helicopter. This did not work as when the pilot turned the plane around he did not understand sun angle and angle of view (we did try to brief him); I ended up with shadowy butt shots–not good. On one of the helicopter rides I paid more money to share with only one other person so that we would be shooting from the same side; unfortunately for us, we were fogged out at the shore and we had almost no chances for good photos. With either a helicopter or small prop plane the doors or windows should be off so that you have a clear view. 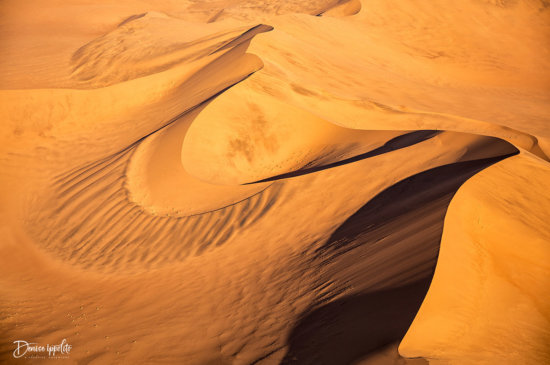 On my first small plane ride with the doors off, I photographed Lesser and Greater Flamingos over the Ewaso Ngiro River delta, Lake Natron, on the border between Kenya and Tanzania. I sat on the right hand side of the plane in the rear; my seat belt was held together with duct tape. The g-force from the Cessna prop plane as it made its quick decent was more than my body could bear. I suffer from motion sickness; I should have used a patch in hindsight. I only lost it at the very last second as we touched down but during the last 15 minutes of the flight I was clearly suffering.

My images from that trip hooked me on aerial photography. The experience was amazing and I knew I would do it again! Fast forward a year and I was up in the same exact plane in that same seat (the seat belt was fixed!!) with the same pilot. I used the same settings as I felt they worked well for me. I shot in Manual mode as I always do, no need to switch to a mode you are not comfortable working in at the last minute. I used auto white balance as I always do and evaluative metering. I knew that I needed to watch that I didn’t blow out the white on the flamingos so I carefully checked my histogram after my test shots. I shot with a wide open aperture as my subjects were at a great distance and depth of field would not matter–especially with my wide angle lens. I also kept a watchful eye on my shutter speed as I knew I would need a lot of shutter speed to keep things sharp (average shutter speeds were about 1/2000sec.). I used a 24-105mm lens and a 100-400mm lens attached to full frame camera bodies. Both attached ahead of time with camera straps and lens hoods off. 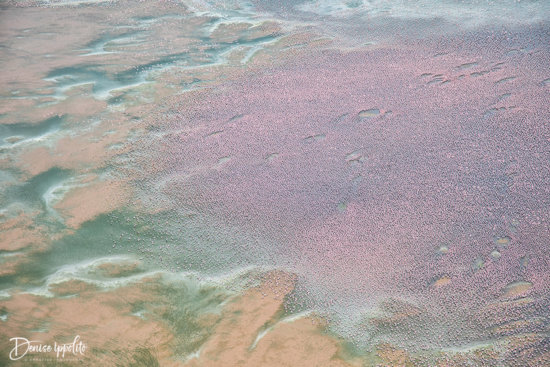 It can get chilly once you get up there since the doors are off. I wear a light jacket and a beanie hat, it also helps to keep my hair out of my face. This second time I used a Scopolamine Patch to keep me from getting motion sickness. I used the same patch in the Southern Oceans so I knew my body could tolerate it. It worked out great and I never even got a headache.

I look forward to my next adventure to see and photograph different parts of the world from a bird’s-eye view. The different perspective has its challenges but it also has its rewards…

Have you tried your hand at aerial photography? If so feel free so share your own experiences and tips in the comments below.

Travel Photography: What to Do When the Weather Sucks