Perched on top of a mountain, nearly entirely surrounded by several hundred metre high vertical cliff faces with a mote of water below, enclosed from the outside world by cloud piercing peaks, enshrouded in early morning mist awaiting to be revealed, sits one of the worlds most mesmerizing sites on the planet, Machu Picchu. There really is nothing else like it!

Ever since my mid to late teens when my mind first started wondering, Machu Picchu had always been a beacon, silently calling. However, at that point in my life South America was too remote, and required a certain trip that I was just not ready for at that age. But years later, after getting my “travel legs” through a series of backpacking adventures, In 2008 I finally stepped foot on South American soil for a year of exploration, with Machu Picchu still sitting number one on my list of things to experience. When that time finally came around, and I was standing at the sun gate gazing down on the ruins being revealed from the mist before my eyes, it was in every sense, a dream come true. The feeling of achieving something that I had put up on a pedestal and been chasing for so many years, is something I wish everyone could experience. 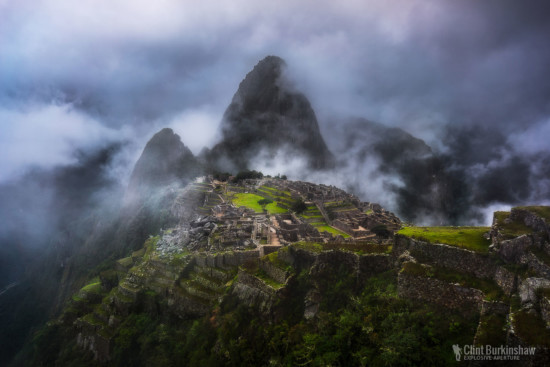 The view from near the Sun Gate

When I returned in 2014, it was every bit as special as it was the first time, perhaps even more, as this time I took my wife and parents to experience it with me. Watching the fog slowly dissipate and reveal an intricate maze of terraces, with the backdrop of beautiful jungle filled mountains flanking the scene in every direction, left me speechless all over again. To me this is where Machu Picchu’s magic fundamentally lays; in viewing it in it’s entirety shortly after being revealed from the dawn fog by the first light. But the magic continues as you walk through and explore the convoluted pathways that crawl on the top of the mountain, and learn how and what the Lost City of the Incas was like in it’s prime.

Machu Picchu, a days travel from Cusco, is perched on the top of a mountain ridge 2,430 metres up in the Sacred Valley. The Incas built the this amazing place around 1450, but abandoned amidst the Spanish Conquest to intentionally conceal it’s location. There it lay hidden in secret, only known by local tribes until 1911 when it’s presents was released to the outside world. It has now been listed as a UNESCO World Heritage site, and one of the New Seven Wonders of the World.

For those whom are fit enough and after a bit of a climb, Huayna Picchu is situated right on top of the peak that sits connected and behind Machu Picchu. It’ll take you the best part of an hour to mount the ancient, steep stone steps to the terrace lookout above, but the view will be worth it. Here you can gaze down on Machu Picchu from right above, as well as the mountains near and far. Terraces on the steep cliff edges of Machu Picchu

Once among the intricate pathways below, wandering the twists and turns of Machu Picchu, I was very impressed with what I found. Huge stone carvings, precision cut to fit amongst one another, temples, houses, terraces, agricultural networks, and more. Following a guide around and listening to the history and interesting facts about the different parts of Machu Picchu is definitely worthwhile, but wandering off and getting lost amongst the ruins and checking out all the little areas alone, is definitely a must and what I loved spending the majority of my time doing.

Before the day had come to a close, my wife and I trekked back up to a ledge near the Sun Gate and just sat there perched on one of the stone terraces, gazing back down at Machu Picchu with Huayna Picchu towering behind. The serenity, the beauty, the enchanting feeling you get in this spot is unachievable anywhere else. Well, at least it was for me. The view from inside Machu Picchu

Some advice for visiting Machu Picchu

Getting to Machu Picchu can be difficult, or it can be easy. Either way, it’s going to be expensive, so I recommend just doing it the easy way – a travel agent. The price you pay will vary based on a few things; your location to how close you are to Machu Picchu. For example, if you book in Australia then you’ll be paying much more in comparison to booking while in Lima, which will be much cheaper. If you book while you’re in Cusco, then it’ll be slightly cheaper again. Though be careful as there is only a limited amount of tickets for both Machu Picchu and Huayna Picchu (only 200 positions available for the later), and if you’re going in peak season you’ll want to be very careful doing this! Keep a good regular eye on the availability no matter what time of year. You can check the availability by checking on the official government site, or by visiting any tour agency and getting them to check for you. Though at the time I last went, paying through the government website was shut down by Visa due to fraud being detected from fake credit cards getting processed through the site. So again, please be mindful of this stuff and do some googling first.

A difference in price is also made by the individual tour operator. If you’re booking at an expensive hotel or resort, then you’ll likely be paying through the nose for your ticket that’s no different to anyone else’s. The best thing to do is buy local by researching the recommended local Peruvian travel agencies on the internet and physically visiting them once in Lima. But once again, keep an eye on the availability through the government website. A point & shoot photograph from when I first visited in 2008

To get from Cusco to Machu Picchu, you’ll need to get a bus that will connect you to a train, which will take you through an amazing journey through the mountains to Aguas Caliente, a little characteristic town closest to Machu Picchu. Get your tour operator to get return tickets to/from cusco, as trying to mix and match bus/train time tables is an absolute nightmare unless you know what you’re doing. Make sure one of your train journeys is during daylight hours, as the scenery is mind blowing!

Tip: I’d suggest getting your own way to Cusco and spending a few days there to explore before going to Machu Picchu – it really is a breathtaking city. And if you really have time and want to see some back Andean country on the way there, take the 21 hour bus ride from Lima. It may be tedious at stages, but it’s an interesting ride. One thing also to consider is; if you’re going to do the Sacred Valley in addition to Machu Picchu, book it with the same tour operator and have them organise getting you to Aguas Caliente from Ollantaytambo (one of the beautiful sets of Incan ruins in the Sacred Valley), as you’ll have to come via Ollantaytambo to get to Cusco anyhow, and it’s often the last stop on the Sacred Valley tour. It’ll save you a lot of transport hours.

It’s a very long day when visiting Machu Picchu, with quite a lot of walking and climbing. So when you’re finally done, you’ll probably appreciate spending an extra night in Aguas Caliente, kicking your feet up and reflecting on the amazing experience you would of just had.

Copyright © 2018 Ugo Cei Travel Photography: What to Do When the Weather Sucks

Photographing the Desert
Scroll to top