Anyone who has visited more than a few desert regions knows that not all deserts are the same, barren expanses of sand. Deserts can be surprisingly varied and, besides sand, host a huge variety of landscapes, vegetation, wildlife, and people.

Having photographed deserts in the US, the Middle East (Israel, Jordan, Oman), and Africa (Egypt, South Africa, Morocco), I have come to love those places and the unique opportunity they offer to enjoy a relationship with nature that is, for the most part, pristine and untouched by the hand of man. In comparison, most of the wilderness that we experience in temperate regions, especially in Europe, appears completely natural only to the untrained eye while, in reality, it bears the clear signs of anthropization (“the conversion of open spaces, landscapes, and natural environments by human action”).

Probably because the deserts are so inhospitable to people, they (together with the high mountains and the deepest jungles) offer a glimpse of nature as it is supposed to be. This is one of the reasons I love being in the desert and love photographing it so much.

With this article, I want to share a few suggestions inspired by a recent trip to Oman. These suggestions are aimed at helping you make the most of a photo trip to a desert region. 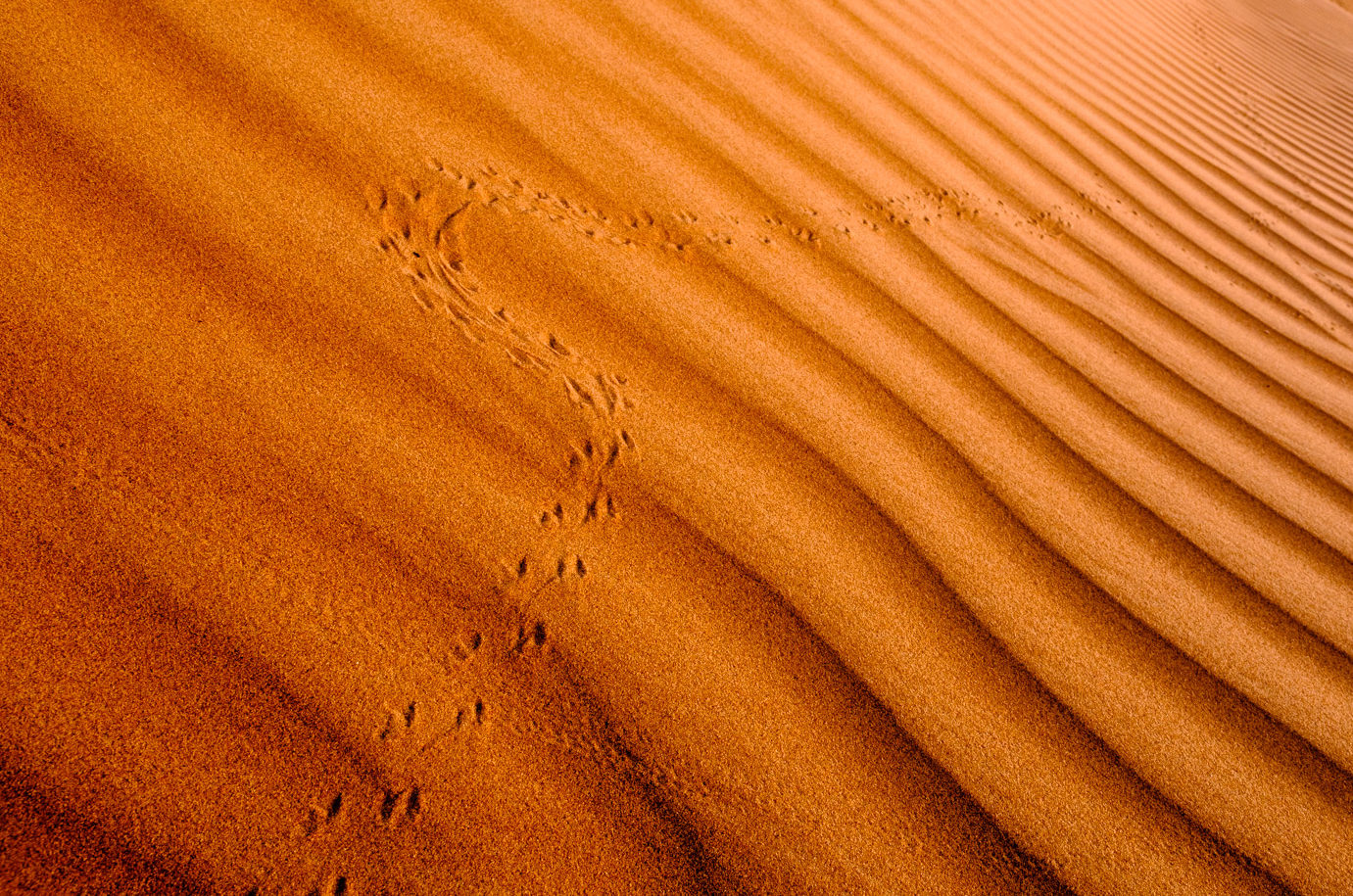 It should be pretty obvious, but I believe it bears repeating: desert sand gets everywhere, especially if it’s windy, which is often the case and especially at the edge of day, when we love to be out photographing.

Avoid changing lenses out in the open, if at all possible. If you must, do it inside your backpack. Trust me, you don’t want to spend hours fixing dust spots in Photoshop or worse, having to have your camera serviced to clean it.

When low-lying light hits the ripples of sand created by the wind on a dune, it enhances them and allows for the creation of very graphical images. Conversely, when the sun is high in the sky, shadows are absent and everything looks flatter. Besides, in the desert it’s much cooler at sunrise or sunset. I love to take my shoes off on a sand dune as soon as the sun sets. The sand cools incredibly quickly and feeling its chill under my bare feet makes it much more enjoyable.

At that time, get down low and let the lines of the sand invite the eye of the viewer towards the focal point of your image by using a wide-angle lens to exaggerate the perspective. 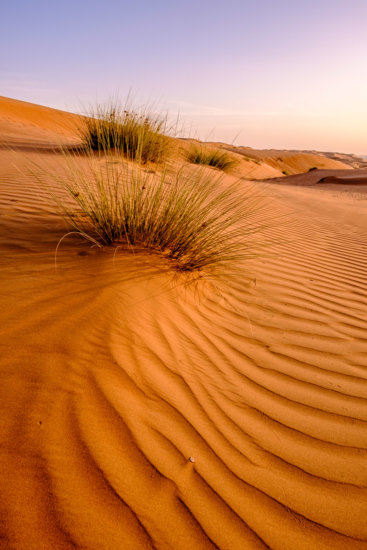 I never want to go to sleep when I am spending a night in the desert. Clear skies with barely a hint of haze and the lack of light pollution make it possible to see millions of stars. I love photographing the night skies in the desert but even without a camera I could spend countless hours with my gaze affixed at the firmament, counting the shooting stars.

Here’s a couple tips, if you want to shoot the night skies over the desert.

1. Include some foreground interest

A photo of the sky and only the sky is not very interesting. Including some elements on the ground can make for a more compelling composition. Here the foreground interest is provided by the dead tree whose stark branches protrude against the sky. 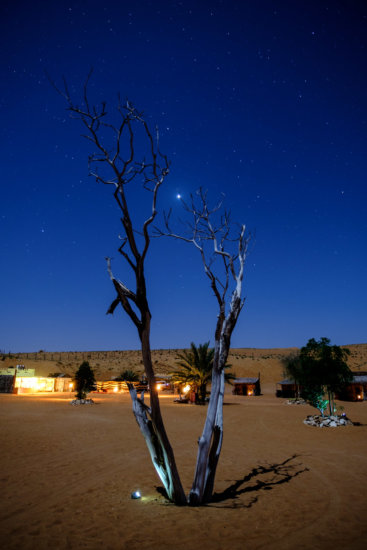 In case you are wondering, the light on the ground is provided by the full moon, which was so bright that night that it was possible to walk around our camp in the middle of the area known as Sharqiya or Wahiba Sands, almost as if it had been full noon.

On the same night, after the moon had set (I checked the exact time of moonset and set my alarm clock to wake me up then), I used a flashlight to illuminate the tree. The moon had already set so the sky was much darker with many more stars visible. 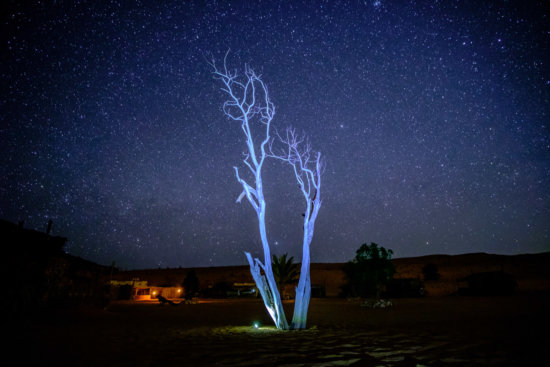 Use the Human Elements

Deserts are far from barren and dead – you can find traces of wildlife everywhere, like the tracks in the photo at the top of this article. But a surprising number of people live in the desert and get their sustenance from it. Across the Middle East and Arabia, Bedouin tribes are the masters of the land. Nowadays, they might drive Toyotas instead of camels and wear Rolex watches, but they are guaranteed to offer some tea to their visitors.

So, why not also bring a portrait lens in the desert? You might meet a mischievous Bedouin boy who loves showing off in front of your camera. And who said that portrait lenses are only useful for taking portraits of humans? 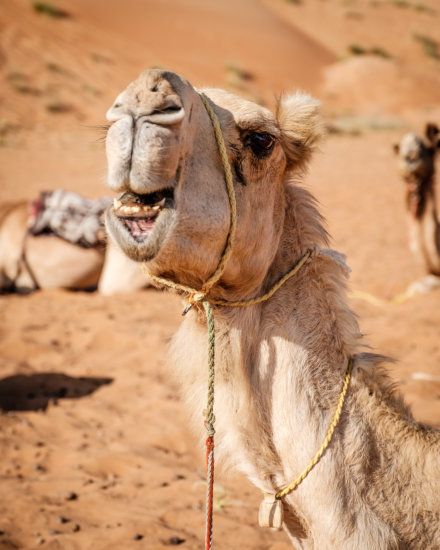 While the iconic image of the desert, as made popular by films like Lawrence of Arabia, is composed of an endless theory of sand dunes, the erg (sandy desert) is only one of of the many possible types of desert. Equally fascinating is a rocky and mountainous desert, especially when it dives abruptly into the blue sea, like around Oman’s Musandam Peninsula.

When confronted with such a scene, it is imperative to use a polarizing filter. It saturates colors, eliminates reflections from the water, and cuts through the marine haze.

If you plan to visit Oman, be sure to spend a few days in the interior provinces around the Jebel Shams and Jebel Akhdar ranges. Take a jeep tour to to admire their Martian landscape. The road is hair-raising in parts but the views are well worth it.

Getting Ready to Photograph Fall Colors
Scroll to top