If I had a nickel for every time I’ve heard a photographer tell me they wouldn’t photograph an iconic location because it’s already been photographed, I’d probably be making a good living. Let’s face it, as nature photographers, most of us are striving to create new and compelling images. This often leads to ignoring those iconic locations and looking for  undiscovered ones.

Icons are icons for a reason. They are incredibly beautiful and photogenic places. Early in my photography career, I occasionally balked at heading to an iconic location because it’s been done already. But then I began to think: there must be more than just one composition in these iconic places. And for the most part, there is. One of my favorite reasons to visit an iconic location is the challenge to create something new or different.

The famous subway feature in Zion National Park is one place that has been frequently photographed. It’s one of the most sought-after images in the southwest and for good reason. It’s a spectacular area.

Originally, I had no desire to visit the place. I heard it was a difficult hike in and, based on the images I had seen, it looked as if there was really only one potential photograph. I finally decided to grab a permit for the hike and just see the place for myself.

For me, being able to experience these hard-to-reach locations is part of photography. It’s not just about taking a photo. I started my hike with the mindset of grabbing “the shot” just for the sake of it. When I finally got to the subway, I was amazed at the beauty not only of what a few other photographers were lined up to photograph, but the view behind them. It was a scene that I hadn’t seen before yet it seemed just as incredible to observe and photograph.

After getting the shot, I knew I would have to return the following year to hopefully create another photograph with better conditions. Fortunately, that turned out to be the case. I came away with two images from this area that I felt were quite unique in terms of what I had previously seen. 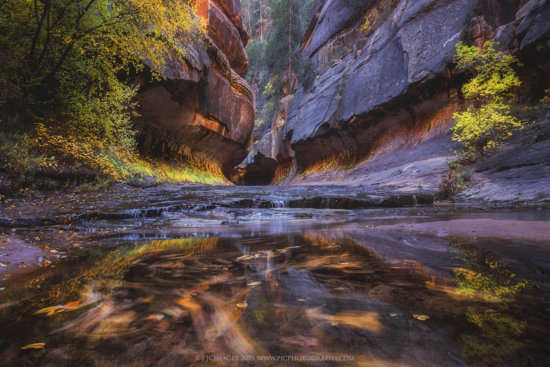 A shallow pool reflects the subway feature in Zion National Park as leaves streak around during a long exposure. 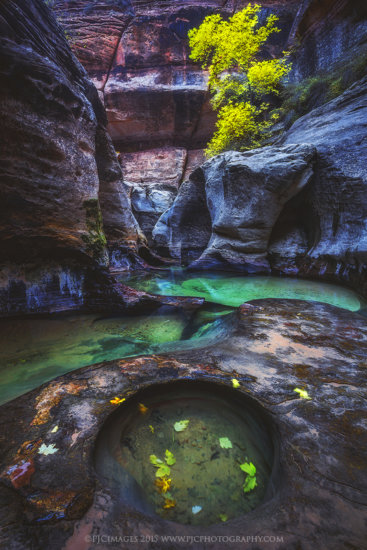 What do you do in a location that is swarming with other photographers lined up to get the shot? Wander off a little bit. While you’re wandering, be courteous to other photographers. You wouldn’t want someone walking into your shot, would you? Ask before walking beyond the line of photographers or if you feel like you may be within their field of view. Sometimes, this can mean wandering quite a distance or positioning yourself a particular way to avoid being a distraction in someone else’s image.

Despite the crowds awaiting the sunrise at Mesa Arch, I managed to create a photo that was very different from the typical shot. Perhaps it’s not as breathtaking as the sun lighting up the underside of an arch, but it’s certainly a different perspective on the subject. 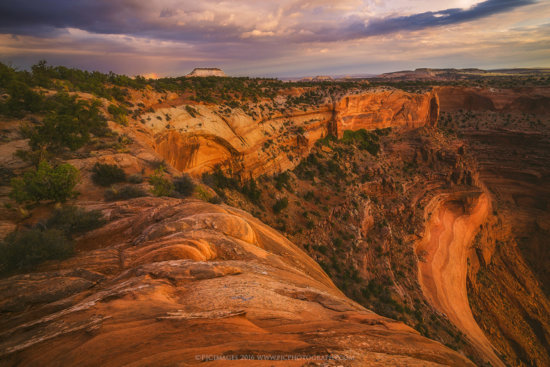 A brief storm over Canyonlands National Park with a view overlooking Mesa Arch on the middle right side. A close inspection of the master file reveals the crowd   swarmed by the arch itself.

On my most recent fall color chase through Colorado, I had a specific photographic location in mind… the iconic True Grit scene of chimney rock rising above an aspen bordered meadow. I set out to shoot it on my last evening of the trip.

At this point, I was feeling fatigued and rather worn out from the previous five days. I had set up in the meadow along with a dozen or so other photographers when I realized that I still had about an hour to explore and find alternate compositions. I decided to head into the trees to see what I could find. My vision was to use some aspen trees and the right light to frame one of these rather iconic mountains.

When I discovered a perfect frame of the chimney, I set up my shot. All I had to do was wait for any sort of light to filter through the clouds. Fortunately, there was a break in the clouds. The beautiful golden back-lit glow illuminated the mountain and foliage perfectly. Some ranchers had set up camp on the opposite side of the meadow and let their horses out to graze. Adding to my fortuitous timing, these horses wandered right into the middle of the meadow. It was icing on the cake for both the shot and the trip. After the light disappeared, I headed for my car and wandered past at least two dozen photographers set up right along the road. 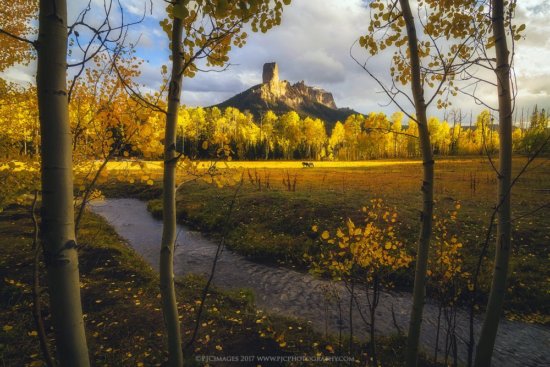 Autumn aspens frame the iconic chimney rock as golden light bathes the scene in southwest Colorado. A duo of horses added to the scene.

The next time you feel like all options have already been photographed at a location, think again. You can almost always find a way to put your own unique spin on a scene. Get out there and try something different!