As landscape photographers we are often obsessively consumed with sharpness and depth of field. The most common strategy these days is to have everything in our photos sharp from front to back. After all, this is an incredibly effective way to have our viewers’ eyes traverse the entirety of our frame. Nine times out of ten it’s a fairly simple matter to set up a composition, stop down to something like f/11, dial in your focus point, and have everything in the frame in focus. But every now and again you set up a photo only to find that, no matter how far you stop down your aperture or where you put your focus point, you simply cannot get your entire scene sharp from front to back. While this may be frustrating in the moment, it turns out that there are actually four simple solutions to this problem.

One of the most likely reasons you can’t get everything in your frame in focus is because you are too close to your foreground object which can make your required depth of field too great. Even stopping-down to f/64 isn’t going to help if you’re trying to get a scene in focus from 2″ away to infinity. When you back slightly away from your foreground relatively speaking this puts your foreground and background closer together, making your required depth of field less. You’d be amazed what backing up even just a foot or two can do. 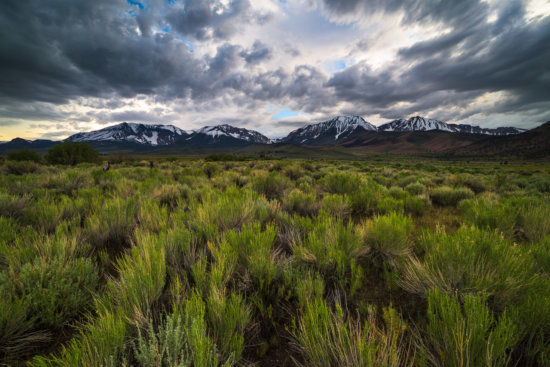 The wider you get the more forgiving depth of field and focus becomes. You might think it’s because zooming out simply makes the out-of-focus areas smaller in your shots. But going wider has a physical effect on depth of field, even if aperture stays the same. In other words, it’s far easier to get an entire scene in focus at 14mm than it is at 50mm. Check out these sample photos, shot at f/2.8, 1/8 sec, ISO100, and 24mm and 14mm, respectively. You can see that, even though both shots are at f/2.8 and were focused in the exact same spot, the pine needles in the background are markedly sharper in the 14mm photo.

Focus stacking sounds complicated but the concept is very simple. You take a series of photos of the same composition, changing your focus point slightly each time from your immediate foreground all the way through the background. The idea is that each element in your photo should be in sharp focus in at least one of your series of photos. You then use software to combine all of these individual photos into a single, sharp master image.

Here’s how it works:

Set your lens to its sharpest aperture and take multiple shots of your scene, adjusting the focus point each time until you have a sharp shot for each part of your scene from the immediate foreground through to the mid ground and on to the background. Bring these raw files into your raw processor and process each one the exact same way. Then bring all of these photos into Photoshop and stack them as layers. Next, use the Edit > Auto-Align Layers and Edit > Auto-Blend Layers commands to combine them.

If you can’t get everything in your shot in focus with a deep depth of field, try the complete opposite. Use a shallow DOF to enhance just one part of the scene. That way, the out of focus parts of your photo appear intentional instead of accidental.

I hope this article has given you a few solutions when you run into those DOF issues. Any other great techniques for dealing with moments when you just can’t get everything in focus? Let me know in the comments!

Thinking Beyond the Iconic Shot
Scroll to top