Long before there was social media, there was Terra Galleria (owned and operated by QT Luong). When Jay first started his photography career, he could barely manage to take a photo without blown highlights and a half-decent composition. During that time, Jay was a regular visitor to Terra Galleria in hopes that one day he would be able to pursue national parks photography like QT Luong. 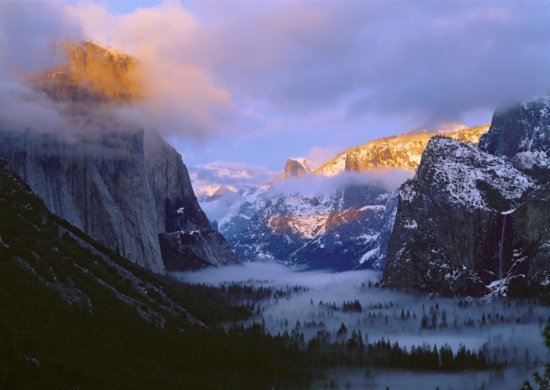 So after all these years, Jay was really excited to have QT Loung share his vision for National Park Photography for Infocus Newsletter audience. Here is what QT Loung had to say:

I feel a great love and connection with the natural world. The wilderness provides me a sense of peace and aliveness. The national parks are some of the most spectacular and pristine wilderness, yet they are accessible. I thrive on looking for new experiences. In 1993, I visited Yosemite, Denali, and Death Valley. I realized how much diversity the national parks encompass—they present every ecosystem a vast continent has to offer—and it was all new to me. The contrasts were endless compared to what I was used to in Europe, where the last remnants of wilderness are found only in the mountains. Each park represents a unique environment, yet collectively they are all are interrelated, interconnected like a giant jigsaw puzzle. 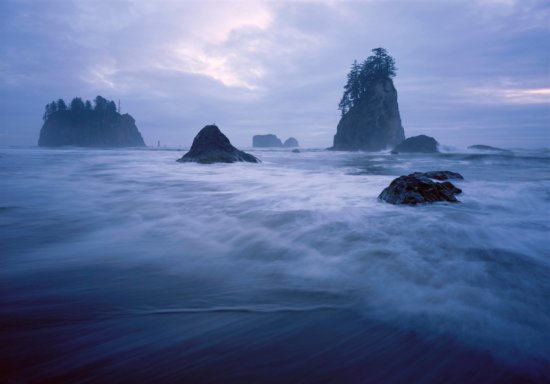 Not far from where I lived on the west coast, Ansel Adams and others had established a rich tradition of American landscape photography. I had admired the prints in local museums and galleries. I learned to use the same large-format camera as the masters. In the fall of 1993, after I returned from Death Valley and inspected one of my first 5×7-inch transparencies on a light table, I was astonished to see more details than I noticed when I was standing at the scene. I realized that a viewer could have a close look at the landscape through the visually complex, detail-laden images, which would enable them to vicariously stand where I stood when I took the photo. It was then that I decided to pursue national park photography with a large-format camera because, at that time, only large-format photography would do justice to their grandeur.

To find the places I want to go to, I rely a lot on photographs. I have seen millions. Incidentally, it’s been very rewarding to me when viewers periodically write to say that my website and book inspired them to visit places that they didn’t know before. Before a first trip, I spend about half of the trip time researching the location. During the trip, besides photographing, I do also a lot of scouting and I collect information at visitor centers (such as handouts that are difficult to get elsewhere) towards the next trips. 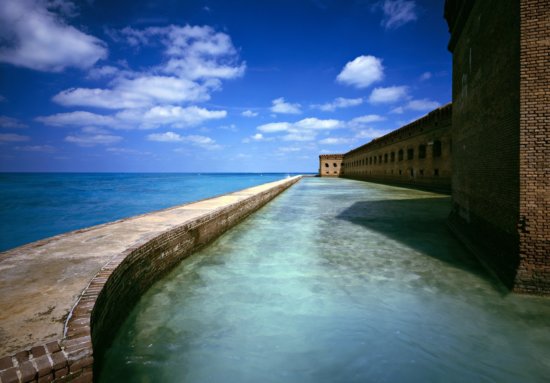 Each park is unique. Photographing all of them makes it much easier to decide! They are worth visiting several times at different seasons. Even Dry Tortugas, a sub-tropical park with almost no vegetation, presents seasonal changes that affect what you can photograph.
However, if your time or resources are limited, here a few ways you can prioritize your visits: 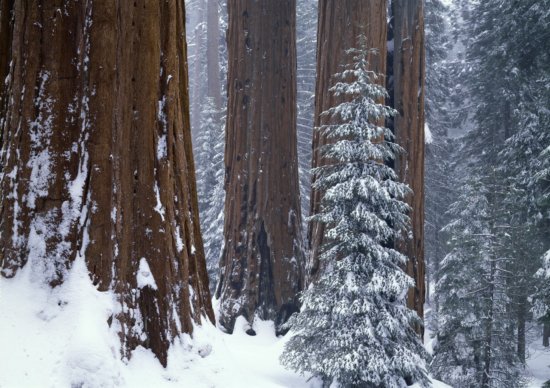 I started out with film for photographing national parks. My large format kit consists of a 5×7 inch Canham wooden camera, with six lenses ranging from 90mm (18mm equivalent) to 720m (120mm equivalent), and about 15 double film holders. However, nowadays I use film sparingly and mostly shoot digital for national parks photography. 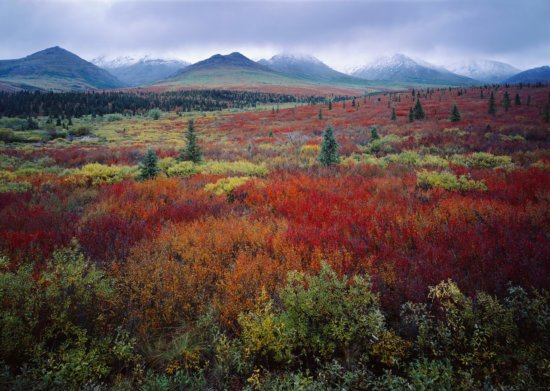 Currently, my mainstay is a pair of Sony A7R2 with the three f/4 zooms: 16-35mm wide angle lens, 24-70mm normal camera lens, 70-300mm telephoto lens. Sony’s sensor performance is the best of all, but the mirror-less bodies easily catch sensor dust, so minimizing camera lens changes help. Depending on national parks photography I am pursuing at the time, I also carry a limited selection of special-purpose adapted lenses. The Sigma 20mm f/1.4 and Nikon 14-24 f/2.8 are excellent for night photography. Of the three Canon TSE (tilt shift) lenses, the 24mm gets, by far, the most use. For macro, I rely on the Canon 100mm f/2.8 and the MP-E 65mm which has no equivalent in terms of magnification. I have old Gitzo tripods with RRS ball heads and, for day trips, I carry everything in a Fstop Satori. When you factor in all the non-photographic gear necessary in the wilderness, no backpack is too big.

Let the light guide your choice of subject and composition

Wide landscape photography often need strong light because their shapes are defined by shadows and contrast. Often, sidelight and low-angle light accentuate those shapes. Conversely, small subjects such as flower close-ups and forest scenes benefit from the soft light provided by a cloudy sky or full shade. On overcast days, concentrate on intimate scenes and exclude the sky, since its brightness may overwhelm your photography compositions.

Come early and don’t give up until it is over

For pre-planned national park photos, try to arrive well in advance of the optimum hour to give yourself plenty of time. If that’s a sunrise, it means arriving at pre-dawn when the light is beautiful on its own. After sunset, don’t pack up immediately when the sun is down, as the light when the sun is fifteen minutes below the horizon is soft and directional at the same time, particularly great for photographing canyons in national parks.

Walk around and don’t settle for the initial composition

When I am shooting film, including the backup exposure, each composition costs $20 in film and lab costs. Before clicking the shutter, I made sure to explore the scene thoroughly. The same discipline easily translates to other cameras. When you happen upon a scene you like, keep exploring possibilities. Look for interesting foregrounds and compositions rather than settling for the first spot you happen upon. In the fall of 2015, I came to Sprague Lake in Rocky Mountain National Park. I walked the entire shore of the lake before choosing my spot. Although I didn’t remember it, I had photographed from the exact same spot more than fifteen years ago and for good reason. Yet, out of the dozens of photographers around the lake, only one other one was nearby. 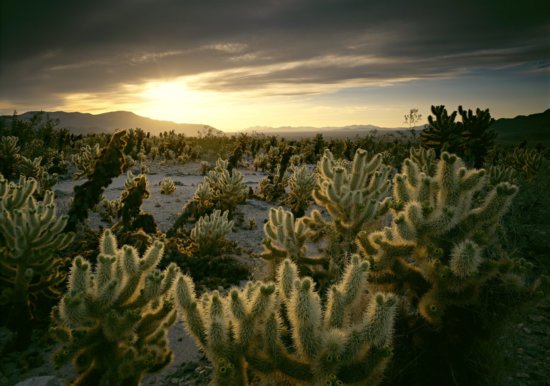 Since the beginning, landscape photography has been intimately tied with the development of the national parks. Jackson’s photographs were instrumental in convincing Congress that the wonders of Yellowstone were real. It is landscape photos that inspire people to visit the parks. Landscape photography is one of the greatest tools to preserve the earth’s wild lands, and my work is intended to continue the mission of photographers who influenced me. 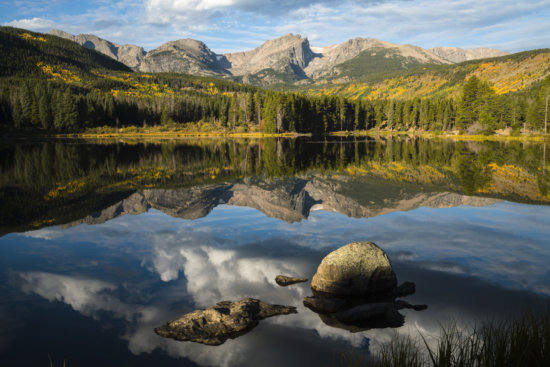 Standing on the shoulders of those giants, I am trying to expand the repertoire with lesser-known locations and times of day. I hope readers will want to to get out of the beaten path to lesser parks and lesser known areas of famous parks. A main objective of Treasured Lands is to showcase the diversity of the national park system as a whole as well as each park. This deeper coverage required a big book.

National parks photography has brought me much joy; a desire to share, in a tangible way, the elation that comes with being in such special places so that the reader can experience the same joy. I measure its success by how much the my national parks photos inspire the readers to visit the places for themselves, for the happiness they will bring through a deep connection with nature, and because the experience is likely to transform them into an advocate for conservation. More than ever, the national parks and our public lands in general, need a constituency that will speak out for them.

If you want to find out more about QT Luong you can visit his awesome website at: terragalleria.com

Do you have question for QT Luong ? Feel free to ask them in the comments below. 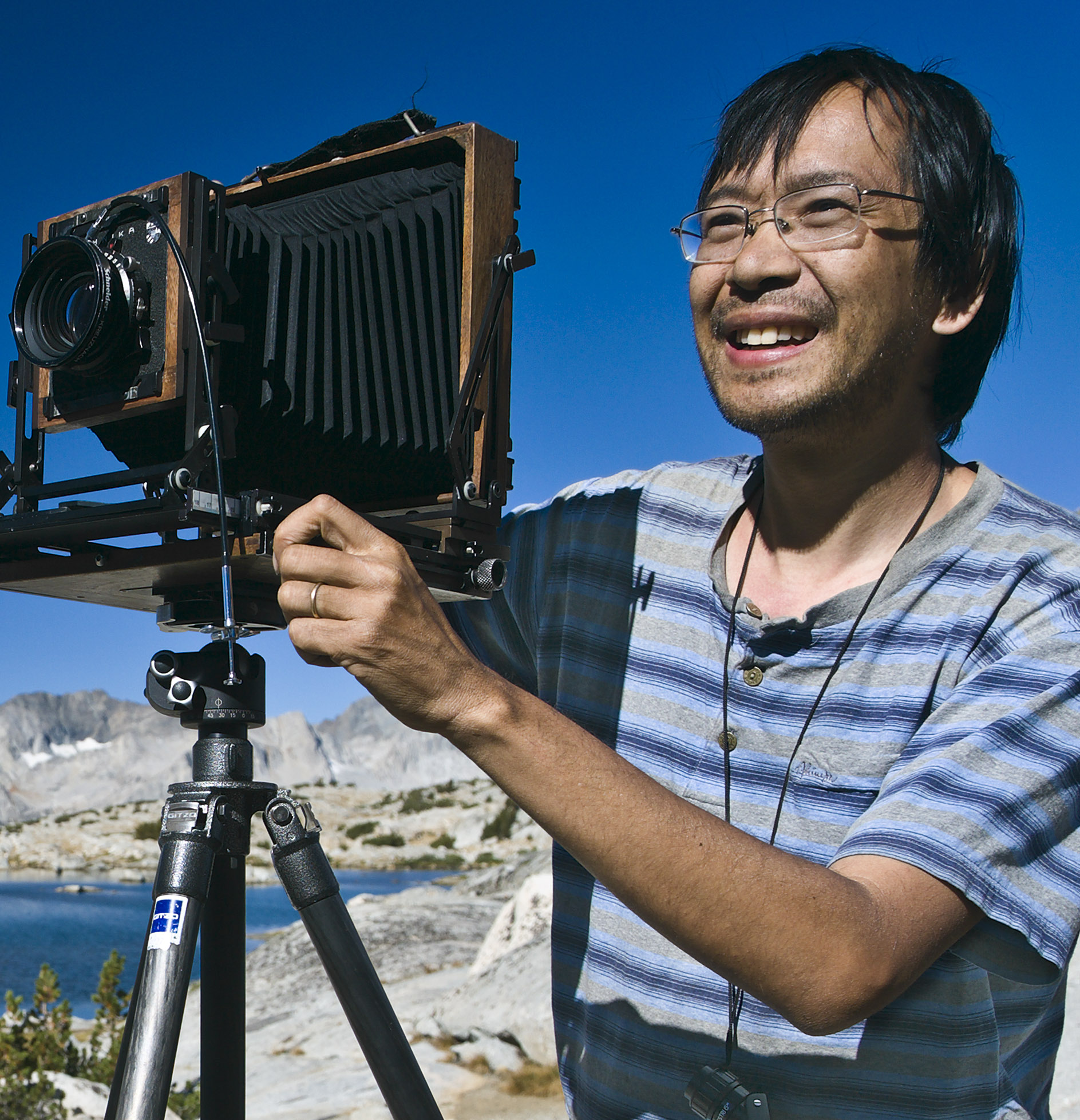 QT Luong is a full-time photographer from California, known for being the first to photograph all 59 US National Parks – in large format. Ken Burns and Dayton Duncan featured him in “The National Parks: America’s Best Idea” (2009). His photographs, published in dozens of countries around the world, have been the subject several magazine profiles and solo gallery/museum exhibits across the country.

Born to Vietnamese parents in Paris, France, he was trained as a scientist. The revelation of the high Alps led him to become a mountain climber. When he came to the US to conduct research in the fields of Artificial Intelligence and Image Processing for what was to be a short stay, he chose UC Berkeley, because of the proximity to Yosemite–a world class rock climbing destination.

There, he fell in love with the National Parks and decided to photograph all of them with a 5×7 large format camera, a single-handed, self-financed, monumental project that had not been completed by anyone before. QT’s in-depth coverage of the Parks often dictated long hikes into the backcountry, with a 75 lb backpack, and only his passion and dedication to keep him company.

QT Luong is the author and photographer of “Treasured Lands: A Photographic Odyssey through America’s National Parks” which won six national awards and became a critically acclaimed best-seller.

Delving into the Danakil Depression