If you live in a location that doesn’t see much winter weather, sometimes you have to search for it. Being that I live in Arizona, it is not often I get to take advantage of winter weather photography. Most people head to the mountains and forests for winter scenes.  However, on very rare occasions, winter comes to the desert sometimes right in my own backyard.

Long ago when I first moved to Arizona, I never expected to see snow again. During a December family trip shortly after the move, we headed up to Grand Canyon National Park for the first time. It was during this trip I realized the desert indeed sees winter. There was something about seeing fresh snow on the red rock landscape. It was so foreign to me and I often thought how cool of a photograph the scenes would make. 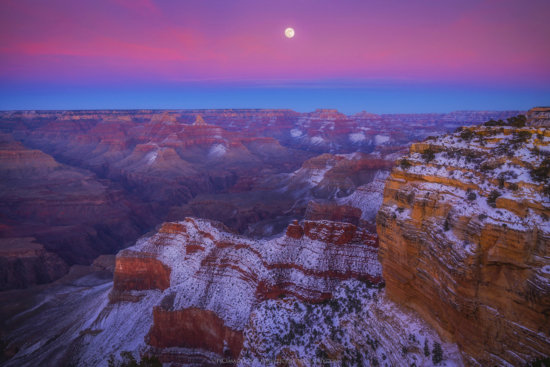 Shortly after that Grand Canyon trip I became interested in photography and as they say, the rest was history. It wasn’t until a number of years ago that I really put effort into photographing the winter desert. The thought of driving in snowy and icy roads and standing in freezing temps was never appealing to me. I figured I was missing out on some incredible opportunities, so I acquired some winter attire and began to venture off into the frozen desert.

The first trip was of course to the Grand Canyon where I spent perhaps the coldest night I’ve experienced before. I awoke to fresh snow and parting cloud cover and marveled at the scenes before me. I didn’t quite create the winter wonderland images I had thought of during this trip though. A couple years later, I returned to the canyon once again just in time for sunset and moonrise. A recent snow had left a partial white blanket over the canyon a few days prior.

That snowy scene at the canyons edge left a lasting impression. The conditions inspired me to put more focus on photographing these winter scenes. So for the past few years, I have done just that with every chance I get. Of course, the desert is not just constricted to Arizona. I have experienced one of the most memorable winter conditions in Bryce Canyon National Park on New Years Day 2017.

Cloud inversions are quite rare, although they have occurred a little more frequently. Grand Canyon National Park is a popular location to see this phenomenon when the conditions are just right. This is where most people anticipate they will occur in the southwest because of the temperature differences within the canyon. However, I witnessed one over Bryce Canyon. Cloud inversions are one of the most surreal experiences in nature and the conditions really need to be perfect for them to occur. Standing above the clouds viewing massive sandstone buttes breaking through at sunrise is a lasting memory. 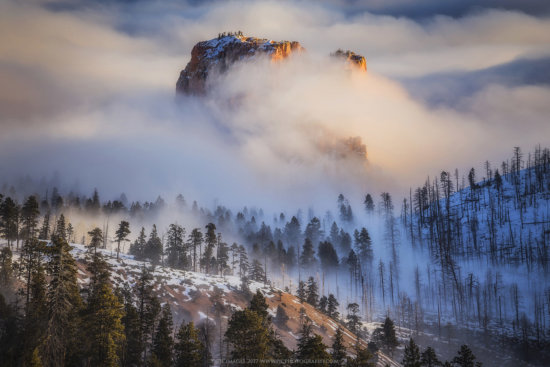 Some of my favorite tools to use while photographing these winter scenes are my telephoto and zoom lenses. In fact, often times I don’t even take out the wide angle lens unless the scene truly needs to be completely taken in. Using the zoom lenses allows me to focus on specific aspects of the scene such as snowy accents on a ridge, swift moving clouds, distant buttes, etc. Often times I find myself utilizing the super telephoto zoom to be a little more creative and really isolate a narrow moment of light and atmosphere.

Although I tend to travel hours and hours in search of desert snow and wintry scenes, occasionally it is literally just miles away. Just this New Years day (as in Jan 1st 2019), many photographers were anticipating snow over the Superstition Mountains near Phoenix. There were even reports of seeing some snow come down IN Phoenix, although it didn’t really stick much. Local photography pages were abuzz wondering how much snow, where to go, when to go. My girlfriend and I opted to get up before the sun and venture into the Superstition Mountains.

The last time this area had seen any significant snowfall was on New Years day 2015. We were hopeful to see a blanket of snow on the upper mountains and sure enough, there was snow. Because many of the peaks were a little further off from the road, the telephoto was my go-to lens. With the range of focal lengths I had available, I was able to shoot from the same location for nearly an hour. This allowed me to create a number of unique images throughout the morning. 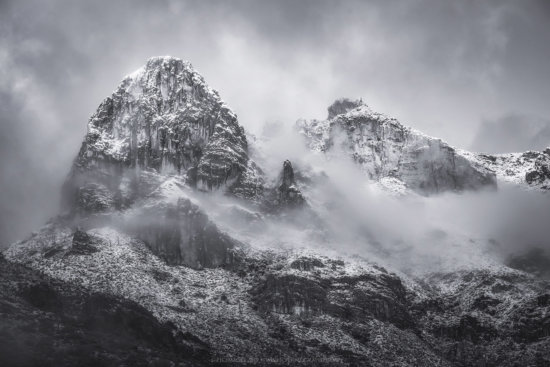 As is always the case with photography, knowing how to properly expose is of the utmost importance. Snow can play tricks with your camera sensor especially with high contrasting colors like red sandstone. Although it may be extremely beautiful, nothing is more frustrating than coming home with overexposed winter scenes. 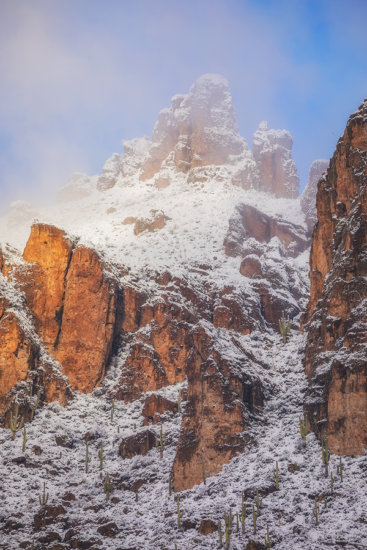 A winter photography experience in the desert is truly magical. The atmosphere is so much different than in the mountains and forests. Seeing the red rocks of the southwest in snow or Saguaro cacti in snow, it is likely a sight you won’t forget (as long as you have your camera!).

The Single Best Investment for Landscape Photography
Scroll to top