Just five months after a total solar eclipse passed across the U.S. mainland, photographers in North America will be treated to another great opportunity to photograph an eclipse. In the early morning hours of January 31, 2018, Earth’s shadow will block the sun from hitting the moon, producing a total lunar eclipse that will glow orange in the sky.

Although total lunar eclipses can be seen much more frequently than total solar eclipses, this upcoming eclipse could be a special opportunity for photographers. For those in the western half of the continental U.S. and the middle part of Canada, the moon will be very low on the horizon during totality. This will allow photographers to use a long telephoto lens to render the moon large, while still including some of the landscape in the foreground.

This lunar eclipse over the Boulder Flatirons occurred when the moon was fairly low in the sky. However, it will be even lower in much of North America on January 31, so you’ll want a pretty clear view of the horizon.

If you want to photograph this eclipse, you should start planning where to shoot it. You should pick out a spot where the moon will be directly over an interesting object, like a mountain, rock formation, or building.

You can go to: this website to see the exact times of totality at the location you’ll be shooting.

I recommend using the free software program Stellarium to visualize how the eclipse will appear. First, press F6 and select a spot near where you will be shooting. Next, press F4 and check the “Scale Moon” box. This will make the moon larger and show the orange glow that it will have during totality. Now, press F5 and set the time and date to the start time of the total eclipse, as found on timeandate.com above. You can then use the “fast forward” button on the bottom left pop-up menu to see how long the eclipse will last and how high it will be over the horizon.

You can do more precise planning using an app like The Photographer’s Ephemeris or PhotoPills. These apps have built-in maps that let you plan exactly where you need to stand to include both the moon and a foreground object in an image. Plan to stand a long ways away from any foreground object, so you can include most or all of it in your shot with a long lens. 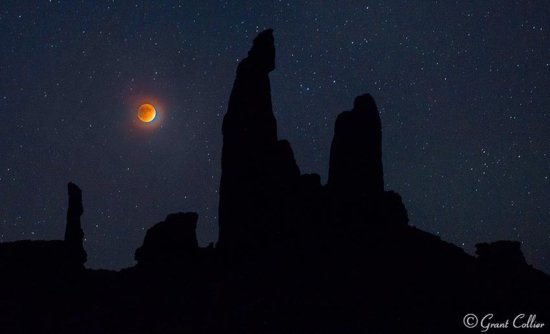 Another great thing about this eclipse is that will happen during twilight for most observers in North America. As a result, there should be enough light to capture good detail in the land and the moon with a single exposure. When a lunar eclipse occurs during the dark of night, you usually need to blend multiple exposures to capture good detail throughout the image.

You will need a long lens of around 200-600mm to render the moon fairly large in your image. I recommend the Tamron 150-600, as it is relatively inexpensive for a large telephoto lens (though cartainly not cheap).

When the moon is low on the horizon, it may be bright enough out for you use the auto-exposure settings on your camera. However, to ensure a proper exposure, I recommend using manual exposure settings, especially when the moon is higher in the sky. You should open your aperture to its widest setting (like f5.6) and set the shutter speed to about ½ second (with longer exposures, the moon can start to blur). If your images are coming out significantly underexposed, you can raise the ISO until you get a good exposure (but make sure you’re not blowing out any highlights and lower the ISO as it starts to get brighter out). Always zoom in on your first few images after you take them to make sure your focus is set properly at infinity and everything appears sharp. 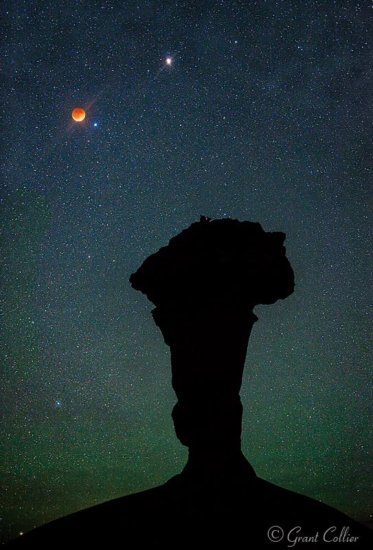 Unlike the upcoming lunar eclipse, the moon was high in the sky during this eclipse over Utah. I had to use a wide lens to include the foreground, thus making the moon appear much smaller.

When the moon is very low on the horizon, the sun will be about to rise in the opposite part of the sky. It may be so bright out that the eclipsed moon won’t show up very well in your images. So, make sure and shoot when the moon is a little higher in the sky as well. The moon will glow orange for over an hour in locations where you can view most or all of totality. As a result, you will have plenty of time to get shots with the moon at different heights and to move around and capture different compositions.

Whatever you do, make sure and set your alarm very early and don’t hit the snooze button! If you live in the western part of North America, the next eclipse that will be this low in the sky before sunrise will occur exactly 19 years later, on January 31, 2037.

10 Lightroom Shortcuts That Every Photographer Should Know
Scroll to top