Whenever I photograph at a popular landscape photography location, I always see a mass exodus of photographers as soon as the sun goes down.  For many years, I was part of this exodus, as I believed the best light was gone as soon as the sun set.  This was before I discovered the magic of the twilight hour to capture stunning landscape photos.  Now, I see the sunset not as the end of my photo shoot, but the beginning.

Unleash the power of texture blending in Photoshop for fun, profit and sheer delight with these exclusive textures by Alan Shapiro.

There are three stages of twilight – civil twilight, nautical twilight, and astronomical twilight.  Each of these stages lasts about 30 minutes, though it can be longer or shorter depending on where you are on the planet and what time of year it is.  You can determine the exact times each of these twilight stages occurs on many websites, including the astronomy section of WeatherUnderground.com.  You can also find this information on apps like PhotoPills or The Photographer’s Ephemeris.

The first stage of twilight after sunset and the last stage before sunrise is known as civil twilight.  It occurs during the time the sun is between 0 to 6 degrees below the horizon.  During this time, you can often get vibrant colors in the sky, since a lot of light from the sun is scattered and refracted by the atmosphere.  The clouds may have some of the bright orange or pink glow that you would see at sunrise or sunset.  You can also capture images of the Earth’s shadow, which is the shadow that the Earth casts on its own atmosphere.  This shadow will usually appear with a bright pink band of sky above it, known as the Belt of Venus or the anti-twilight arch. 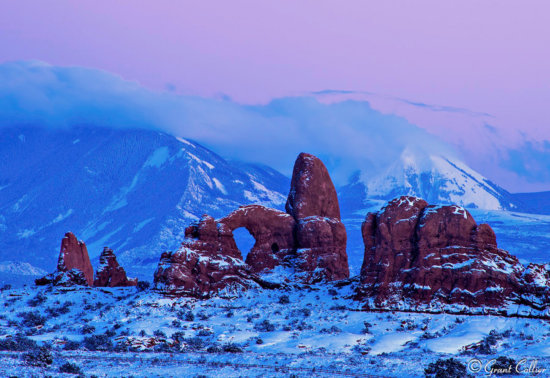 Landscape photography with Belt of Venus, Turret Arch and the La Sal Mountains in Moab, Utah

The period when the stars and planets are just visible is often referred to as the “blue hour”.  During this time, blue wavelengths of light from the sun are more easily refracted by the atmosphere back onto the land, making the scene appear bluer than normal.  This effect is most pronounced during the time the sun is about 4 to 6 degrees below the horizon, though it is noticeable before and after this time.

You can capture some interesting landscape photos during the blue hour if you are capturing something that is already blue, like the ocean.  It can deepen the blues even more, giving a somewhat surreal effect to the photo.  This may not be as desirable if you are photographing objects that aren’t blue, as it can give the appearance of a color cast across the image.  In this scenario, you can increase the white balance temperature until you remove the color cast.

During civil twilight, it will usually be light enough out to get good exposures using your camera’s exposure meter.  Alternatively you can also use your camera’s histogram using liveview to properly exposure your landscape photo during this hour. If your camera does not have a Liveview, you should check the histogram on the back of your camera after you take your shots to make sure you got the exposure correct.  Make sure the data extends to the right side of the histogram, without blowing out any highlights.

During nautical twilight, it may start to become too dark to use your camera’s exposure meter.  You’ll need to switch to manual exposure on your camera. You should use the widest aperture that you can, while still getting everything in focus. Landscape photography at this time of day will require you to use long exposures (up to about 30 seconds). You may also have to use higher ISO settings on your camera to properly expose your photo and get data extending to the right side of the histogram in camera.

It will start to look quite dark to the naked eye during nautical twilight.  However, your camera can often still capture some golden light hitting the landscape.  You’ll usually get the best light on the land if you are facing away from the direction where the sun set or where it is about to rise.  If, on the other hand, you face toward the direction of the sun, you can often get good colors in the sky just above the horizon.  If there was a very colorful sunset, some of the color on the clouds may last until nautical twilight.

During the beginning of nautical twilight in the evening (or the end of it in the morning), it will often be light enough to get a good exposure of both the land and the sky with a single shot.  As the light fades, though, you’ll likely need to use exposure bracketing for landscape photography and then blend them in post processing to get final result.

Unleash the power of texture blending in Photoshop for fun, profit and sheer delight with these exclusive textures by Alan Shapiro.

Night photography in Canyon Country at nautical twilight – Some colorful light remains visible over the horizon where the sun set.

Your camera will be able to capture quite a few stars during nautical twilight.  However, it won’t be dark enough to capture very dramatic image of Milky Way for night photography.  Milky Way photography is best doe during astronomical twilight or during the dark of night.

What to photograph during Astronomical Twilight

Landscape photography without a moon or a thin crescent moon during astronomical twilight can easily include many star and a milky way. If there is a brighter moon out, the light from it will likely overpower any light refracted through the atmosphere from the sun, and your shots will look like shots taken under a moon in the dark of night (the sky will appear blue, the foreground will be lit up, and some stars will be obscured).

Even if there is no moon, you can still get a little light on the foreground if you are facing directly away from the sun set (or is about to rise). However, you will probably need to illuminate the foreground with a flashlight and use exposure bracketing – one or more for the foreground and one for the sky – if you want to get good detail throughout the image during astronomical twilight. You will need to use a manual exposure setting on your mirrorless or DSLR camera to capture photos during astronomical twilight. You should generally use the widest aperture on your lens, and a higher ISO setting to get good camera exposures. Your shutter speed can be set using the rule of 500 to keep the star trails to a minimum.

Fortunately, you won’t have to stop shooting after the end of astronomical twilight in the evening. There will no longer be light refracted through the atmosphere, but you can often still get some green and red color in the sky from airglow. The skies will also be at their darkest, making it a great time for shooting the Milky Way night photography. There really is no bad time to practice your night photography skills. You can take shots as soon as the sun sets and keep shooting as long as you want, while the light of day fades into the blackness of night.

How I Captured the Great American Eclipse

How to build an ultimate Landscape Photography Filter Kit