Your choice of shutter speed in nature photography depends upon what you are trying to capture. When you’re working with moving subjects – waves, waterfalls, grasses waving in the wind, boiling mud pots – you can use a variety of different shutter speeds to capture highly creative photos with a strong visual impact.

So just how does one go about selecting the right shutter speed in nature photography? Here are tips to get your started:

Use fast shutter speed to freeze the motion

Jay created the following nature photo of an exploding during our workshop in Yellowstone National Parkin Wyoming several years ago. To capture this abstract nature photo, he used a shutter speed of just 1/2500 of a second. He zoomed in close to fill the entire frame with thick, white mud. Getting in close gave him a minimalist abstract photography composition with a single bubble as the point of interest. Using a fast shutter speed Jay was able to freeze the motion of the bubble and bring out the rich details and textures in his subject. 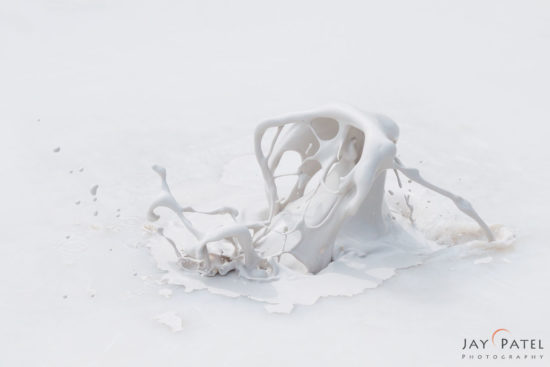 Getting my high speed subject (exploding bubble) in sharp focus was critical for this nature photo. However the bubble at this particular location always appeared in the same spot. So, Jay focused his DSLR camera where the bubble was exploding and then switched his camera to a manual focus mode. This allowed him to lock his focus on his camera at exactly the right place.

I had to use a completely different focus workflow to capture the stunning details in the waves crashing on the rocks in Australia below. In this abstract nature photo, a choppy sea caused thick foam to form on the water’s surface. As the waves crashed against the rocks, the heavy foam exploded into incredibly complex liquid formations. 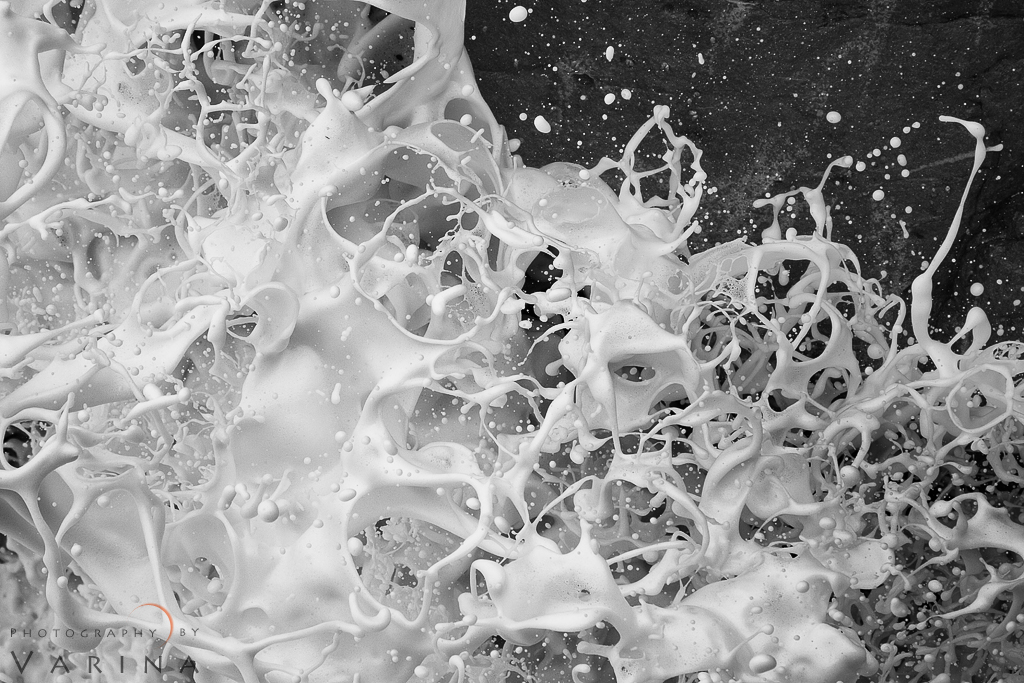 With the help of a very fast shutter speed, I could freeze the motion of the foam to capture its beautifully intricate details. I also chose to convert the shot to black and white to showcase the detail and patterns. Because the subject was moving, I set my DSLR camera in a continuous focus mode and tracked the wave as it crashed on the rocks. Once I wave started crashing I fired a series of photos to capture stunning abstract photo of foam

Use slow shutter speed to create sense of motion

In this next nature photo, the sun had just set, and it was starting to get dark. Because of the fading light and windy conditions, the moving flowers and clouds made it difficult to completely ‘freeze’ the subject motion. Windy days like these provide excellent opportunities to get creative with shutter speed.

First, I set up my tripod low to the ground, framing my shot so that I was really close to the pretty purple and yellow flowers that dotted the hillside. Then, I guessed that I needed about fifteen seconds to get the effect I wanted, so I chose my camera settings accordingly… f/11, 15 seconds, ISO 100). In addition, I made sure my ND Grad filter was adjusted appropriately to help even out the exposure. And then I stood back and waited while my shutter was open. 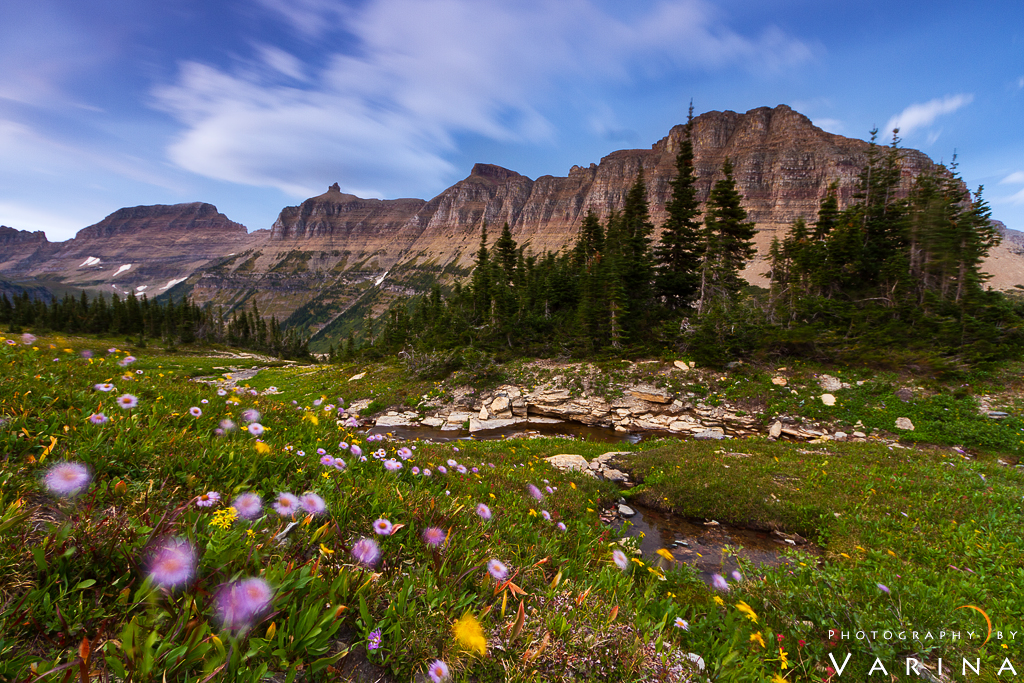 15 seconds produced just enough blur to produce an interesting effect – but not so much that the flowers became unrecognizable. To me, the scene feels like something out of a story book.

This photo from Glacier National Park in Montana is all about capturing the mountain’s beautiful alpenglow (the glowing red light on the mountain opposite the sun). On this day, the water was extremely choppy. It was splashing my face and camera, and I had to frequently wipe the lens to ensure it was dry enough for a long exposure photography. 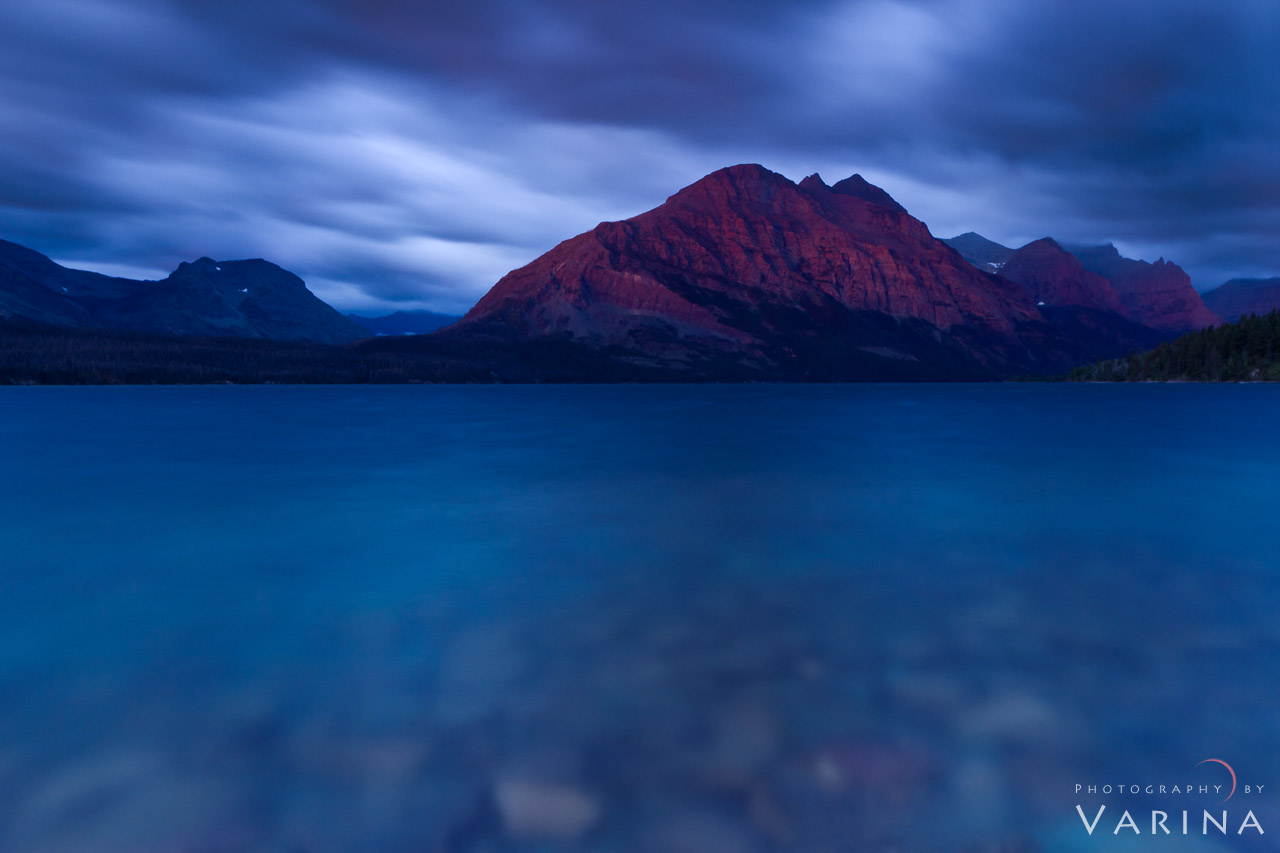 Maybe you already know that I love minimalist nature photography compositions… so it may come as no surprise to you that my goal here was to simplify this photo. For this nature photo, my DSLR camera was on a tripod with its feet in the water. My camera was about a foot above the surface of the water. I used a long exposure of 30-seconds exposure to smooth out the motion of both the water and the clouds, drawing your eye to the main point of interest – the mountain’s beautiful red glow. A long exposure allowed me to eliminate distraction elements (textures in a choppy lake) and create a minimalistic nature photography composition.

Photo stacking with long exposure is another technique to capture the motion in your nature photography compositions. In this photo below from Arches National Park in Utah, the North Star appears stationary over a moonlit Balanced Rock as other stars orbit around it. I used multiple photos stacked long exposures to create this image. 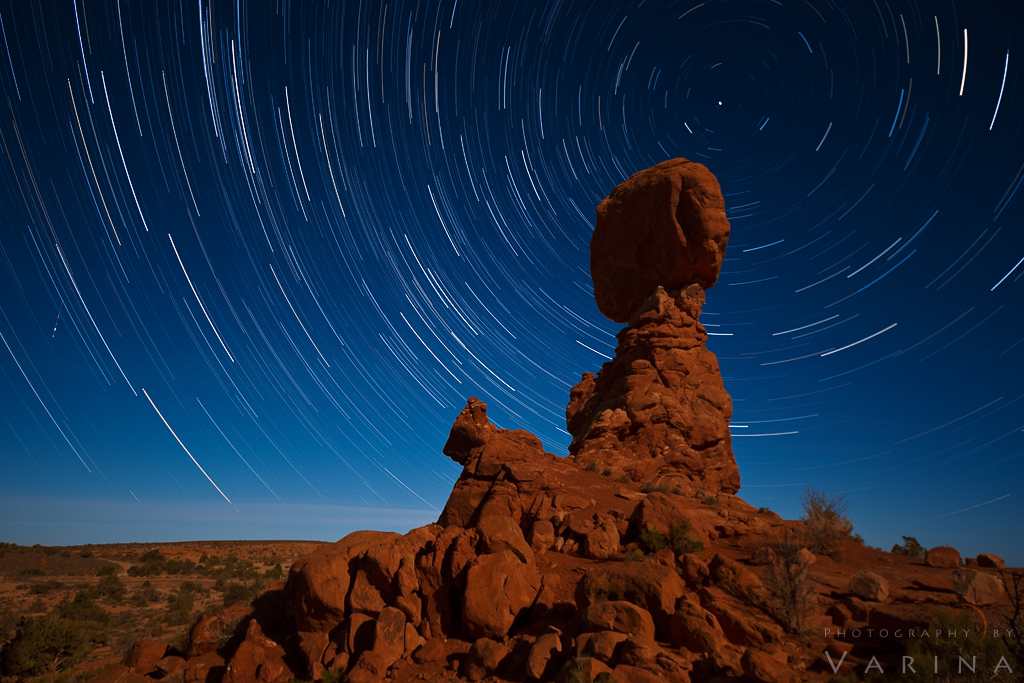 Taken with my DSLR camera on a tripod, this photo stacked image is a combination of 180 shots – each with a 30 second exposure. Thirty seconds shutter speed is enough time to capture tiny shifts in the position of the stars. To capture the motion of the stars over a long period of time, you need an extremely long exposure… or a series of 30s camera exposures that capture the motion in increments. I chose to create and blend a series of images. One extremely long exposure may create too much noise for a high quality photo. So I used Photoshop to blend multiple long exposure images to create the final image that you see here.

Get creative with your shutter speed

Sometimes you have to be creative with shutter speed to capture the motion that you envision, I wanted to make the most of both the color and the circular movement of the leaves in the water in this location.

A fast shutter speed would have captured small spots of color on the surface of the water. Because the swirling leaves were creating such an interesting pattern, I used a slow shutter speed of 30s to capture long lines of color formed by the swirling leaves. These streaks fill a larger portion of the frame with color and make the image even more colorful than it was in reality. 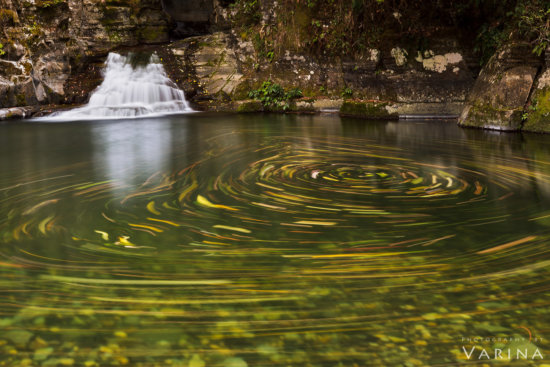 However this shutter speed resulted in the small waterfall being over exposed. By selecting a 6s shutter speed, I was able to capture all the flow lines in the waterfalls. Later, I used Photoshop to to blend two exposures – one for the foreground, and one for the brighter waterfall in the background to my final photo.

Shutter speed allows you to pursue creative nature photography. Whether you choose to ‘freeze’ a moving subject… or to capture its movement as a blur… or to hide distracting elements with a long exposure, your options for playing with motion are endless. How do you most enjoy expressing motion in your photographs?

How to Use Fast Shutter Speed for Nature Photography

When should Landscape Photographers use Fast Shutter Speed

How to bracket your photos for Landscape Photography

Getting started with Exposure Blending in Photoshop
Scroll to top