Learning to use the three components of the exposure triangle (aperture, shutter speed, and ISO) to get a proper exposure is often one of the first things we master as new nature photographers. We must carefully balance all three to allow just the right amount of light into the camera so that the photograph is not too dark and not too light… but just right. However, getting the exposure correct is just one result of your choice of shutter speed and aperture.  Both shutter speed and aperture have profound effects on your nature photography beyond just the exposure. Using them to pursue creative photography, with intention, will set your photographs apart from just snapshots.

The following photo from the Smoky Mountains demonstrates this perfectly. I chose a rather slow shutter speed to allow the water flowing over the rock to blur a bit, thus enhancing the sense of motion in the image.  Had I chosen a fast shutter speed, the water would have appeared frozen and would have had no feeling of movement. In a nature photos like this, I choose the shutter speed first, then balance the aperture and ISO to get a proper exposure. 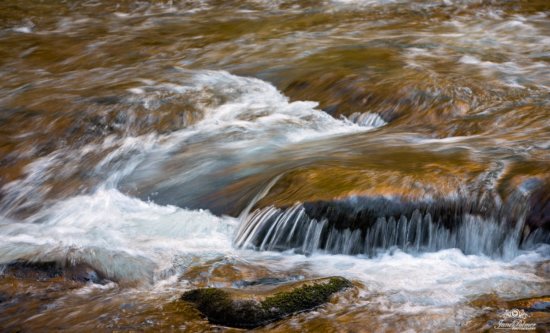 In contrast, the following image of a loon during a preening wing flap was captured at a shutter speed of 1/1600 of a second. I had observed the loons over several days and could anticipate when they would rise out of the water and spin their heads around. I wanted to capture the water droplets flying off of their feathers. After a few missed shots with slower shutter speeds, I determined that I needed 1/1600 to freeze the water droplets. I balanced the aperture and ISO to get a good exposure as always. Because of the shutter speed I chose, the resulting photograph tells exactly the story that I wanted to tell. 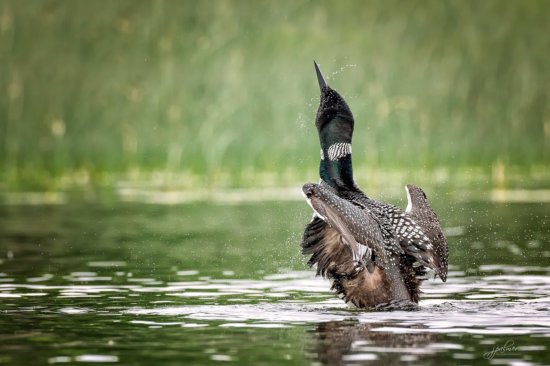 These two nature photography examples demonstrate a critical concept about using shutter speed creatively in your work.  You must first determine what you want to say with your image and then decide what shutter speed is required to tell that story. You still must be mindful of balancing your shutter speed with aperture and ISO for proper exposure.

Just as shutter speed has a dual personality controlling exposure and perceived motion, aperture also has two sides to its coin. We know that aperture is the size of the opening in the lens that allows light to enter and hit the sensor. Obviously, a larger opening (smaller f-stop number) lets in more light.

But, in addition to having an effect on the exposure, the choice of aperture has a profound effect on the depth of field and how much of your image is in focus. A tiny aperture (larger f=stop number like f16) produces a large depth of field; you can have everything in focus from fairly close to your camera all the way to infinity. In contrast, a large aperture (small number like f2.8) results in a shallow depth of field. Depending on where you focus, a large part of your image may be out of focus.

So, depending on the story you want to tell, the choice of aperture is critical for nature photography. In fact, in my work, my decision about aperture is usually the first choice I make when determining a proper exposure.

The following image from the Oregon Coast is a good example of this. I needed the foreground rock to be in focus as well as the distant sea stacks. Choosing an aperture of f14 gave me the depth of field that I needed and also allowed me to use a slightly slower shutter speed which helped to smooth out the reflection on the sand. 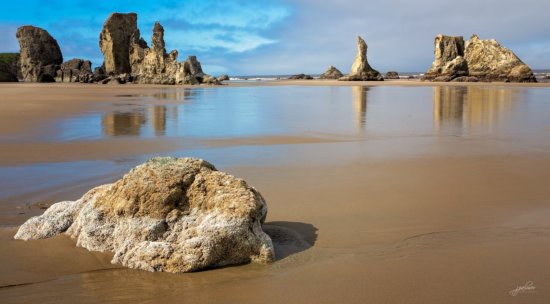 There are times when you want to highlight a part of your nature photo and don’t necessarily want everything in focus. Because our eyes always go to the brightest and sharpest part of a photograph, you can use this fact to bring attention to your subject and reduce background distractions. You do this by selecting an aperture that allows only your subject to be in focus. 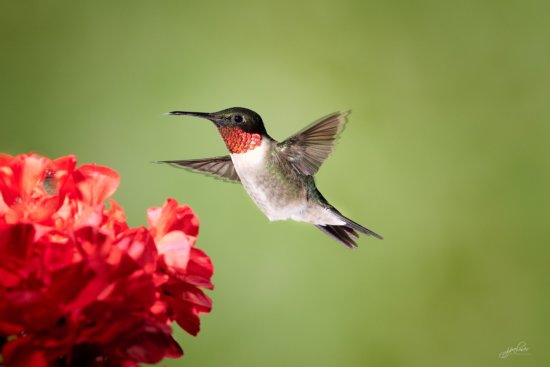 Putting It All Together

When selecting the camera exposure for nature photography, remember that shutter speed and aperture control a lot more than just the amount of light entering the camera. You must get a proper exposure to avoid blown highlights, of course. But beyond that, remember the secondary effects of shutter speed and aperture and use that information in a creative way to tell your own story with your photograph.

Once you understand the basics of the exposure triangle and can get a properly exposed nature photo, you are ready to move beyond just a “proper image.” You are ready to use your camera settings to “paint” an image that conveys your message clearly to your viewer.

So, the next time you are setting up a shot, remember to think creatively about your choice of shutter speed and aperture.  They can add much needed creativity to your nature photography than just exposure!

Jane Palmer divides her time between being a Nurse Anesthetist and a landscape and underwater photographer. A lifelong passion for nature and animals led her to spend more time outdoors with her camera, observing animal behavior and photographing them in action. She has been an avid underwater photographer for 10 years and recently began teaching photography. She often leads dive trips to exotic locations and assists divers who want to learn more about underwater photography. Jane currently lives in St. Louis MO with her husband, who loves scuba diving as well. Jane’s strong background in Lightroom and Photoshop allows her to help her underwater students get the most out of their images. So whether she is hiking in the Smokies or scuba diving in the Philippines, you can be sure Jane has her camera in hand to capture the beauty that nature provides for us.

When should Landscape Photographers use Fast Shutter Speed

Getting Started with Narrow Depth of Field Photography
2 replies

6 Essential Tips to Help Purchase Your Next Camera Lens