Arches National Park is one of the best places on the planet for nature photography. However, it has been photographed so often that it can be difficult to captures images that stand out. In this article, I describe three of the most important skills I believe you need to capture spectacular images in the park.

With amazingly dark skies and countless rock formations rising towards the heavens, Arches National Park is an ideal location for night photography. If you don’t know how to shoot night photos, you’re really missing half of the photo opportunities in the park.

You will generally get the best images during the day if you have dramatic clouds in the sky around sunrise or sunset. If you have perfectly clear skies, it is more difficult to capture great images during the day. However, if you know how to capture night photos, you can simply wait around after sunset,  knowing that there will be an incredible display of stars and planets as soon as it gets dark. 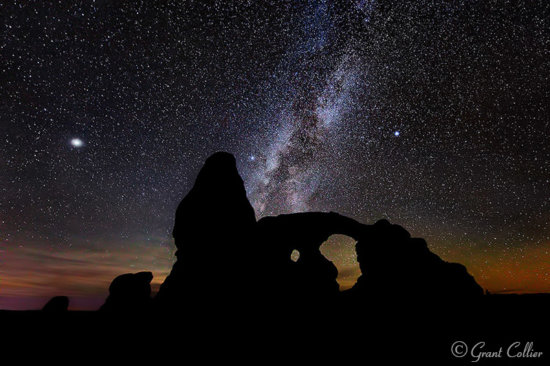 I include a full chapter on how to capture images at night in my new book Collier’s Guide to Photographing Arches National Park. If you want to learn even more, I have an entire book devoted to this subject called Collier’s Guide to Night Photography, along with a series of instructional videos on post-processing night photos.

All nature photographers need patience, as you often have to wait for the right light and spend a lot of time looking for the ideal composition. However, patience is an even more important skill to have when photographing among the large numbers of tourists in Arches National Park. You may become frustrated at all of the people who are in your camera frame. I’ve seen some photographers yell at others to get out of their shot. but you should never do this. This may sound like very simple, obvious advice, but it can be much harder to follow when you have great light and are about to capture the greatest image ever taken, only to have someone walk into your frame. 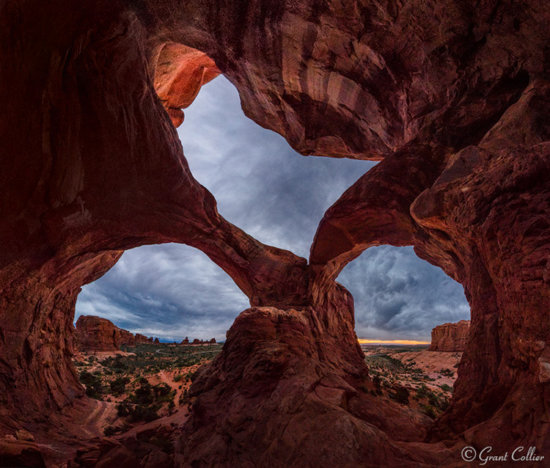 You have some simple options if someone is in your shot. First, the arches are so large that people will often look tiny in your images. You can easily clone them out or include them to show scale. Second, you can simply wait. Most people aren’t very patient, so they will often move out of your shot more quickly then you expect. Third, if there’s simply way too many people around, this can be an opportunity to be creative and look for different compositions that don’t include people.

Another time you may need to practice patience is when shooting at night. You’ll often be joined by several other photographers, many of whom will be light painting. Since I almost never do light painting anymore, the flashlights interfere with my shots. Even if you want to do light painting, the other photographers may not be lighting the rock formations the way you want. Also, be advised that light painting is now discouraged by the park service and it’s possible it will be banned entirely someday. I believe it is well worth your time to learn how to capture images at night without a flashlight. I describe techniques for getting a lot of detail in the landscape under no moon with no flashlight in my book Collier’s Guide to Night Photography.

The simple solution for avoiding other flashlights in your shots is to simply lay back for a couple of hours, look up at the stars, and enjoy the night. One or two hours after it gets dark, almost everyone else will usually be gone and you can have the place to yourself.

Millions upon millions of images have already been taken at Arches National Park. If you want to capture anything different at one of the iconic locations, you’ll need to get creative. One thing I like to do is take large stitched images in order to capture an ultra-wide field of view that is not possible with a single shot. Of course, there’s countless other ways to be creative. It would be impossible to describe the most creative possible approaches since they haven’t yet been tried! 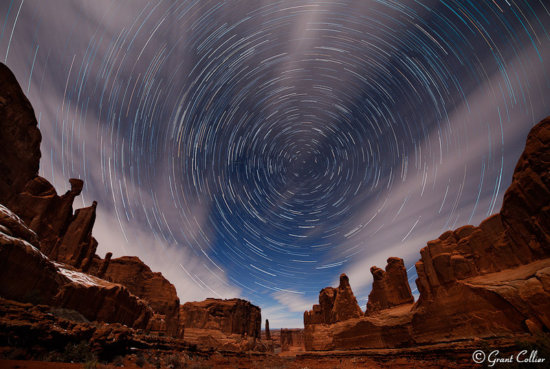 This is not to say that you should never take traditional images of the iconic scenes. You may simply want to capture a beautiful image as a reminder of your trip. I frequently take traditional images within the park, as I find that these are often the ones that sell best. However, I’m always on the lookout for unique images when I’m out shooting.

Another way to use your creativity is to simply take images of less-common scenes. This could involve getting down low to capture a close-up photograph or taking a hike off the beaten path. Just make sure you always stay on official trails, sandstone rock, or washes where water flows. Anywhere else you walk will damage the fragile biological soil crust, which is vital to the ecosystem of the park.

For much more detailed information on photographing in Arches, I have just released a book called Collier’s Guide to Photographing Arches National Park.

How to Refine Your Composition in the Field