I like to tell stories based on my experiences in the outdoors and I use my photographs for this form of creative expression. The selection of visual elements is as crucial to the photographs as are the words when writing a story. The selection of and the way in which each visual element is rendered in the image is akin to the development of key characters around whom the story evolves.

Every story has a beginning, a middle, and an end. In a visual story, however, those components coexist in a single 2D frame. During a sunset, each visual element in the composition has its moment on center stage as the light moves across the landscape. The glow of the optimal light showcases every nuance of tone and texture of that element. As the light moves onto another part of the composition, others fade into muted darkness.

In choosing to tell a story that encompasses the entirety of the sunset’s drama, it is only natural to try to render an image that shows each key element in optimal light I.e. the moment when the angled light and shadows brought to life the character of that visual element.

What is a Visual Story?

It is common for photographers to shoot the entire course of a sunset or sunrise and then select the frame with the most impactful image. Exposure blending is a common technique used to control the amount of light throughout a composition. Temporal blending is a creative extension of this technique.

Once the composition of an exposure is optimized and its arrangement of visual elements is finalized, the exposure is kept constant. The final rendition draws from multiple exposures that encompass the extended period of light change. This final image incorporates each visual element in its most dramatic light. Shadows from rocks in the foreground, light on mountain peaks,  a sunstar on the horizon, changing hues in the sky; are each from a different moment in time. The comprehensive story emerges when all of these different exposures are blended into one image.

To successfully use  the temporal blending technique, it helps to pre-visualize the concept and keep the composition constant through the course of the shoot. For each captured moment, you are adding a brush stroke to the canvas for the final rendition.

When someone asks (and they often do), “Was it really like that?”, my response is “If I can condense the drama of the entire sunrise or sunset into a single moment and convey that in an image, then yes, it was really like that.”

Creating a photograph is like composing a piece of music. The selection and arrangement of notes is critical to rendering harmony. Throwing a bunch of high pitch notes together, for example, would result in cacophony.

In a similar manner, creating an aesthetic image requires the careful rendition of each visual element as well its relationship with the other elements. For the story to flow, the light throughout the entire composition must be carefully rendered. Shadows and highlights are equally important and the flow of light must be seamless and harmonious. The more harmonious the flow of light, the more believable the story becomes.

The following image illustrates the concept of temporal exposure blending. Shooting the sunset at Tre Cime in the Italian Dolomites is an awe-inspiring experience. 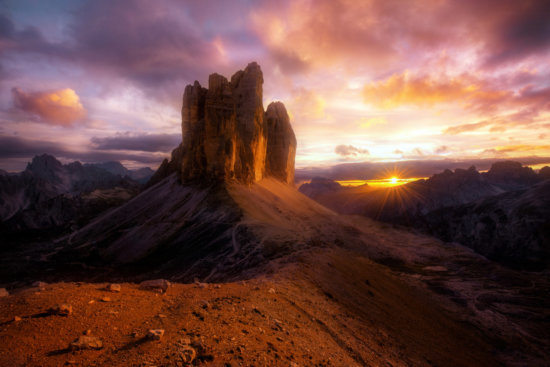 As the light flowed through the landscape, it first illuminated the foreground rocks casting shadows behind them. Then, the fiery colors emerged on the mountain side as the sun dipped lower on the horizon. Finally, the myriad post-sunset hues emerged in the skies above. Blending multiple exposures into a single frame made it possible to combine these separate moments into a single composition. The comprehensive story increased the overall emotional impact of the image.

This technique is also useful when there is a dynamic element in the composition. This element can be fast-moving clouds, fog flowing through a valley, or waves crashing on the shore. By combining a series of images into a single exposure, the dynamic movement is better conveyed in a static image. 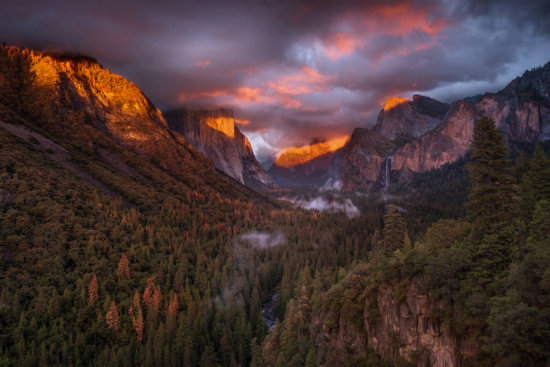 I recently used this technique when shooting the total solar eclipse. As the sun was progressively obscured, the foreground was illuminated by the angled light. This created interesting shadows. During the shoot, there were some clouds rolling through my composition and then finally the climax of the total eclipse.

During the moments of total eclipse, the foreground lost its details and the clouds dissipated. When the foreground still had optimal light, the sun was too bright to be part of the composition. By shooting through a prolonged period and combining the various exposures, it was possible to piece together a wide-angle perspective of the eclipse. 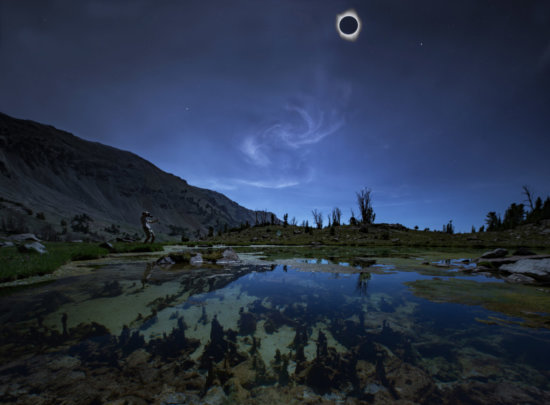 This shot is fundamentally different in technique from the other two examples because, in addition to a temporal blend, it was a perspective blend. It therefore qualifies as a composite image rather than one where the perspective has been maintained throughout.

When Not To Use Temporal Exposure Blending

There are many instances when this creative technique is not necessary and would be counterproductive to aesthetic expression. For example, if a scene is instantaneously filled with ethereal light, shorter distance being covered, and/or the scene is not shot during a period of angled light. The following image of a stream after a rain storm is a good example. 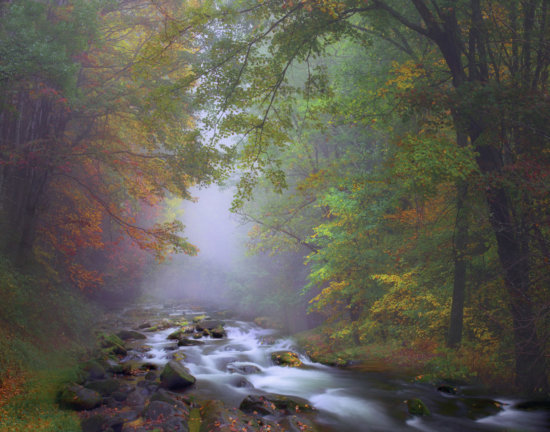 In the photo above, the illumination of the foliage and the soft light of the background are all rendered optimally in a single moment.

Other instances where temporal blending of exposures would not be relevant is when the palette is restricted and the goal is to render a minimalist image. The image is impactful because a it is a simple composition with fewer visual elements and more negative space. 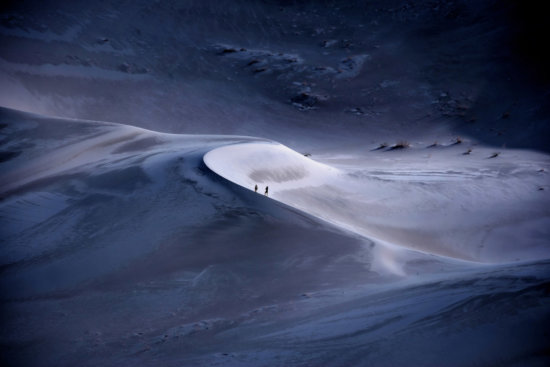 Soft tonal and color palette captured with a single exposure

I photograph because I do not know how to paint. As an avenue for creative expression, I like using various techniques to capture the image and to create its final rendition. Whether we use exposure blending, focus stacking, or other creative techniques, it is a conscious decision to tell our visual stories in a manner that satisfies personal creativity, hopefully establishes an emotional connection with the viewer and makes it possible to share the joy of the experience.

Sapna Reddy is a landscape photographer based in Northern California. She is currently pursuing dual careers as a photographer and a physician. As a radiologist she studies images in an attempt to establish diagnosis and cure the human body. As a photographer she aspires to generate images that celebrate the beauty around us and help to heal the mind. Her work has been published internationally including Lonely Planet, Popular Photography, Outdoor Photography, Landscape Photography magazine etc. She is the winner of the summer assignment 2016 for Outdoor photographer magazine, Minimalism assignment for National Geographic and category runner up for USA Landscape Photographer of the year 2016. In addition to incorporation into multiple medical centers to create an ambiance of healing, her images have been used for video conferencing needs by corporations including Google, Gap, Hitachi, Yahoo etc. She also conducts private workshops focused on creative expression via the medium of photography. Select images are available in art galleries worldwide through Yellowkorner franchise.

When is exposure bracketing necessary for HDR Photography?

How to bracket your photos for Landscape Photography

Getting started with Exposure Blending in Photoshop
2 replies

How to use Shutter Speed Creatively
Scroll to top