Several years ago I flew into Kodiak Alaska to co-lead a Coastal Brown Bear photography workshop in Katmai NP. It was an amazing trip. I enjoyed being so close with nature and of course the bears. It was an experience I will never forget! Since my return I have received a lot of emails asking me what gear I brought, if I was nervous being so close to the bears, did I get sea sick, what camera settings, etc… So I want to address some of those questions in this article. 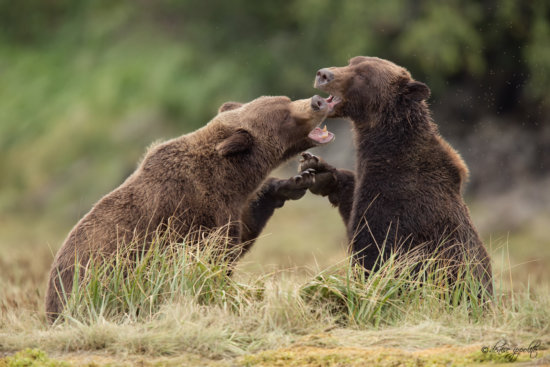 After our float plane landed in Katmai we boarded a large boat that was anchored in a small cove-like area. It was approximately a 5 minute skiff ride to Geographic Harbor in Katmai where we were photographing daily. Since the water was calm and we were anchored I did not get sea sick. In fact I slept like a baby, with the very gentle rocking of the boat—not rolling.

The gear I brought included: the Canon 5D Mark III (I now own the 5D Mark IV) which was my main camera body. I chose this as my main camera body for a few reasons. First of all, because I brought my 600mm lens, I thought that if I used a crop factor camera body I would have too much focal length, I was right. Another reason I chose the 5D was because of the 22 megapixels, I wanted to print a lot of the images and my goal was to capture full frame images with loads of pixels. I also brought along a second camera body and attached it to my 100-400mm lens for more flexibility, I rarely used it. BUT it is almost mandatory to bring a spare body, especially when travelling great distances. I also brought along a 24-105mm lens, rain covers for gear, tripod, Mongoose 3.6 head with low mount arm, and a polarizer filter-all carried in a Roller bag through the airports. Once I got to Katmai, I used my packable backpack to carry my gear in the field. In addition to my camera gear I also brought along my laptop, spare batteries and chargers, extra memory cards and an external hard drive. There was a strict weight restriction of 100 lbs. which included gear, clothes etc… per person. We were weighed at the docks before being transported on the float plane.

For our shore excursions we wore hip waders that were supplied to us by the boat operator. I brought along warm socks, sweatshirts, water proof pants and jacket, gloves, hat and slippers to wear around the inside cabin of the boat. 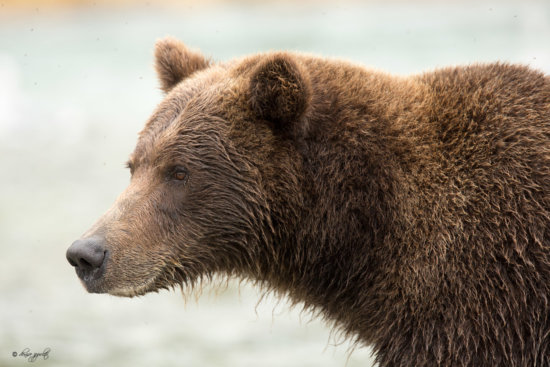 Was I nervous being so close to the bears? I would be lying if I said no, since the only thing between you and the bears- is your tripod. The boat owner said that in 20 some odd years he has never had to use bear pepper spray once. That is good to know as it was a concern of mine. I was assured by our guide that was not going to happen if I followed the rules. No quick or sudden movements, never trap or corner a bear-always give it an escape route, never chase the bears –even if you do it slowly, don’t turn your back to a bear, keep out of the water when photographing, don’t bring food on shore, don’t talk loud or scream, stand your ground if one comes near you—do not turn and run as this will be like chasing and they like to do that, keep your eye out for any behavior that might be a sign of trouble, most of all be respectful of them and their environment- be informed and listen to the guides.

I felt a little nervous at first when they got extremely close and I actually missed a few close-up shots by backing up (slowly). However, once I started to get into photographing I was fine. I also realized that the bears cared only about eating the salmon! Watching them tear through the water trying to pounce on a salmon is exhilarating, I wanted them to do it over and over again so I had more tries to capture the behavior but they were a bit fat and lazy at that point and they spent a lot of the time foraging through the dead and half dead salmon that were readily available on the side of the stream. 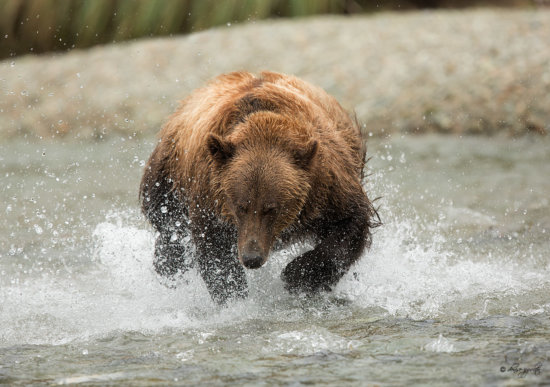 As far as settings go for my camera- I always work in manual mode. I like having complete control over my each of my settings. I am not saying that it is the only good mode but switching back and forth between modes doesn’t work for me. I choose to use manual mode all the time because I feel that it is similar to driving a stick shift-if you do it all the time your reflexes will be good, if you go between automatic and stick you will hesitate for a split second and I never want to miss a shot by hesitating. 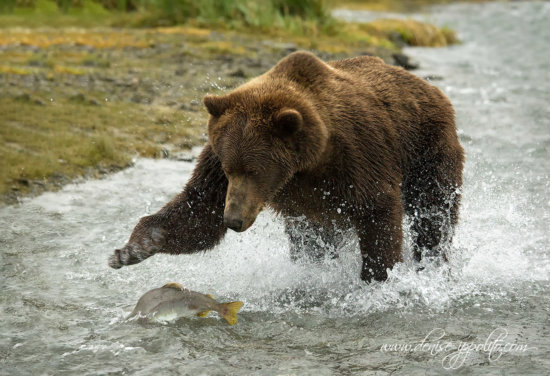 For most of my shots I was shooting at f/5.6 -f/8. I wanted to keep my ISO down as low as possible without having to sacrifice shutter speed. Most of our days were overcast which was great because you didn’t have to worry about harsh light or shadows. However some days the light was not sufficient enough to keep your ISO setting on 400-which is my favorite ISO setting for wildlife. Some days I needed to use ISO 3200-yikes, that hurt! I didn’t use flash during the trip and I don’t think anyone else did.

Feel free to share your own experience and comments below.

Stepping Out of Your Comfort Zone – Part 1

How to set white balance for wildlife photography

What New Camera Should I Purchase for Landscape Photography?