In my earlier article, Learning to See for Black and White Photography, we noted that by eliminating color your focus turns to form, lines, shadows, and texture.   We also discussed how understanding the effects of color filters as used in the film days could affect a monochrome representation, and how this might aid in previsualization as you approach a subject in the field.

Let’s examine a few examples of how I visualize nature photography composition to create final black and white prints.

The use of strong foreground elements are a good way to anchor nature photography composition and help create a feeling of depth.  While this may be accurate, I think you must be a little more discerning in black and white.  In color, the use of an exaggerated foreground component can be very effective, and combined with the element of color can really help in leading the viewer through the image.

In the Yaquina Head Lighthouse image below, the rock blanketed by the incoming surf provided the foreground with the white surf’s edge along the shoreline providing the leading line toward the lighthouse in the background.  The large patterned sea stack on the left helped balance out the composition.

In a like fashion, the Howling Dog Sea Stack has the foreground rock with the water reflections leading through to the mid ground underlying the sea stacks.  Without color you need to be sure you have a clear connection from foreground element to the background because you don’t have the color element to assist.

Black and white photography can handle, and one might argue needs, a lot of contrast.  While there are times when conditions such as fog and other atmospheric conditions might allow for a more ethereal representation, higher contrast can really make a black and white.  Take for example the image “Lone Jack Cattails”.  The RAW image was nothing impressive.  But I knew at the time of capture that I wanted to emphasize the tall and seeming uniform cluster of cattails on the edge of this lake.  They were several hundred feet away and the use of my telephoto help capture what I needed.  In the finished image I minimized the surrounding details by bringing down their values. I increased the luminance of my subject, the cattails and their reflection, and increased their contrast  against the surrounding lake features.

Black and white images can survive quite a bit of contrast, far more so than color.  Indeed, black and white images depend on it.  Not only does increasing contrast help to keep an image from looking muddy or flat, it can also aid in creating mood.  The tonal range and contrast of  the image below, “Clearing Storm Over Chambers Homestead”, helped create a foreboding mood. Yet, the contrasting shaft of light raking across the homestead and the valley floor suggests a bit of tranquility and respite as the storm clears. 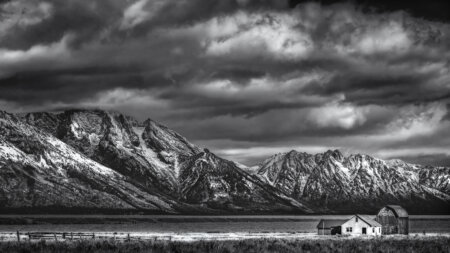 Effective use of Texture & Patterns

A successful black and white photos will often have texture as an important component.  To demonstrate, look at the image blow, “Clearing Storm Clouds and Tufas”.  It was a blustery afternoon resulting in a rather choppy surface on Mono Lake, California.  In view of this, I decided I would force a long exposure using neutral density filters to smooth out the water.  This also had effect on the clouds having a bit of movement exaggerated.  As a result, the final image displayed a stark contrast between the texture of the water and clouds juxtaposed against that of the rough calcium carbonate tufa formations. 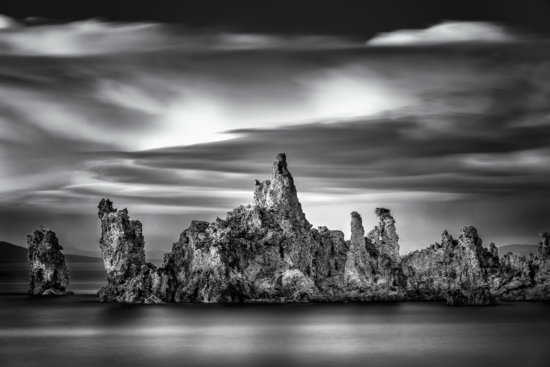 As in any composition, distinct patterns can always strengthen a black and white photography composition. This is true whether patterns are the subject themselves or simply a supporting element.  As an illustration, look at how the patters are used in the image of the sea stacks along the Bandon, Oregon coast.  There are three sea stacks diminishing in size and distance, creating vanishing point type of   relationship.  Also the lightened surf separated by darker areas of surf also produce a repeating pattern. These patterns, assisted by the diagonal lines created by the clouds contribute to a sense of depth in the image. 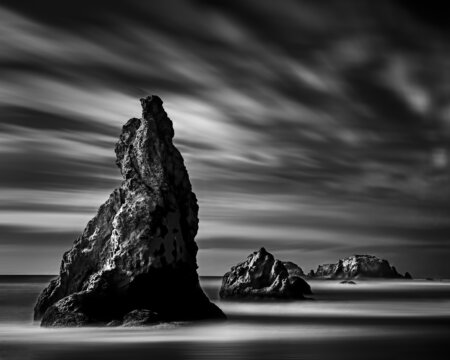 Patterns in Black and White photography created by long exposure at a beach in Bandon, Oregon

Simplification in Black and White Photography

Color images, especially those using strong foreground elements, can have quite of few components all tied together with the use of color.  It is important to realize though, that in black and white photography this can be distracting.  Remember a strong black and white photos relies mostly on shapes, forms, textures, light and shadows.  Ask yourself what is the subject; what are you trying to convey.  Simplifying is very important in black and white photography compositions.  This can be done both in your initial capture and further aided in your post production workflow.  While the color image of Upper Falls at Hocking Hills State Park stood well on its own, I wanted to exclude much of the surroundings and lowered their values in post production after converting to black and white.  I also worked to contrast the softness of the water against the texture of the sandstone rocks around the falls.  Thus, the composition is simple without distracting color elements. 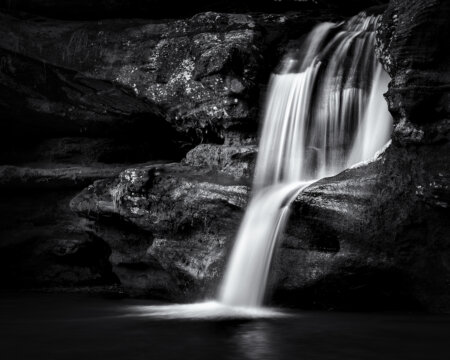 Black and white photography it truly and art form, one completely different from color.  Get out and give it a try.  Put your LCD live view to the monochrome setting (but still shoot RAW, or at least RAW plus Jpeg).  This will vastly speed up your recognition of subjects that make potentially great black and white images.  I would also encourage you not to just take on the mindset that you will just shoot in color and just convert later.  Yes, technically you are doing that by shooting RAW images.  However, it’s best to immerse yourself and mindset in black and white, at least for a given outing.  I believe it will make a difference on how you approach and compose subjects.  I hope you will try it and come back with comments on how you did.  I’m confident you will find the exercise most rewarding.

I am a fine art black and white landscape photographer born in 1951 in Jacksonville, Florida. My photographic interests began in the early 1970’s. Over the years, I emersed myself in black and white photography after build-ing my own darkroom in my home basement.

Selections of my work exist in private and corporate collections. In 2016 the National Park Service highlighted my work as part of their centennial celebration and now have several large prints of my work on display in a Missouri regional park headquarters. I recently received recognition in Black and White Magazine, Black Box Gallery, Monovision Photography Awards,

How to Simplify Your Black and White Photography Compositions

What ND Filters I Carry and Why

Altering the Mood with Black and White Flower Photography

Creative Texture Blending in Photoshop for Beginners
Scroll to top