As the technology in cameras continues to improve, the ability to shoot incredible night photos has become an activity that many have gained interest in. The amount of people shooting the night sky seems to grow exponentially over time. However, shooting at night requires a whole new skillset than shooting during the daylight hours. Even the best daytime shooters have to put themselves in a different mindset when they’re after night photos. As someone who spends many dozens of nights each year shooting the stars and Milky Way, I’ll be sharing some of my best tips to creating stunning night photography. 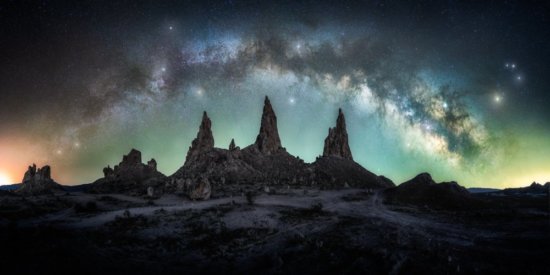 When shooting after dark, it’s important to use fast lenses. f/2.8 or faster is ideal, because opening up your aperture allows more light to hit the sensor. It’s crucial that you gather as much light as you can with aperture and shutter speed so that you can keep the ISO lower. This helps reduce the amount of noise you will experience in post processing. 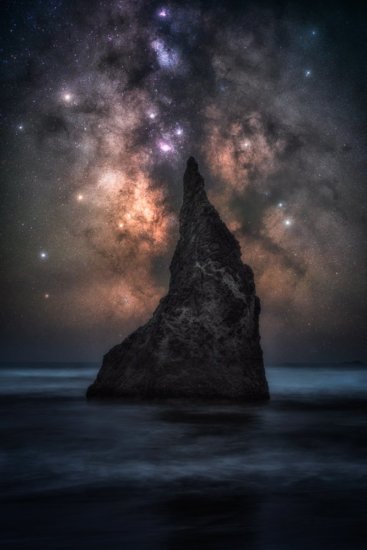 Night Photography captured with aperture of F2,8 on the Oregon Coast

It’s so important to keep the stars tack sharp. In order to do this, you can use something called the rule of 500. The rule is that your shutter speed is equal to or faster than 500 divided by the focal length of your lens (or full frame equivalent focal length). For example, if you were using a 16mm lens, you would use this rule to find that your maximum shutter speed is ~31 seconds. This rule will still allow some very small streaks that are only noticeable when you zoom in.This isn’t a problem if you just post your photos on the web and social media. However, if you plan on printing your images, I recommend sticking to the rule of 400. This rule is exactly the same, except that you take 400 and divide it by the focal length of your lens.

#3 – Pay attention to your focus settings

Dialing in focus at night is not quite as simple as during the day. Autofocus won’t work after dark, so you’ll have to switch over to manual focus. To focus at night, switch your camera to live view. When you turn the focus ring, most cameras will zoom in on live view. Then you can move the view on the back of the camera to the brightest star in the sky. After that, you can dial in the focus until the star is at its smallest.

Once you’ve been shooting the night sky a few times, you’ll learn where the true “infinity” focus is. On most lenses, infinity is not actually at the very end of the lens. Once you find this true “infinity” point on the focus ring, you can easily dial the focus to this point without using live view the next time. This will save you a lot of time and trouble the next time you go out to shoot after dark. 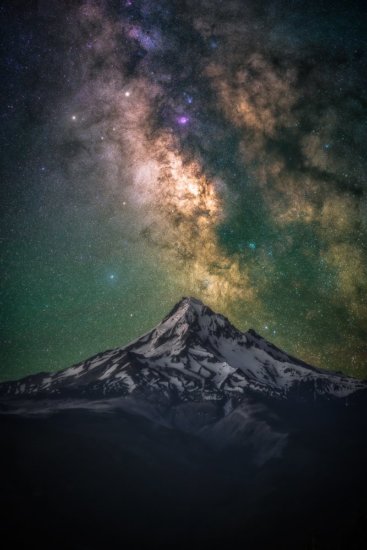 Getting your focus point correct is absolutely ideal if you want to take stunning night photography.

Since most of your exposures will be between 10-30 seconds, it is critical that you have a tripod that is sturdy. Any movement at all will result in a blurry photo. I prefer to use the Slik CF-834 for my night photography. If possible, always hang something heavy from the bottom hook on your tripod to help increase stability.

Even the best digital cameras produce noise at high ISOs. One way that photographers can combat that high noise is by stacking their photos. The most popular program for stacking photos is Starry Landscape Stacker. By taking 6-10 of the same exposures in the field and stacking them in Starry Landscape Stacker, you can greatly reduce the amount of noise in your photos. Using this application should always be your first step of post processing a night photo. 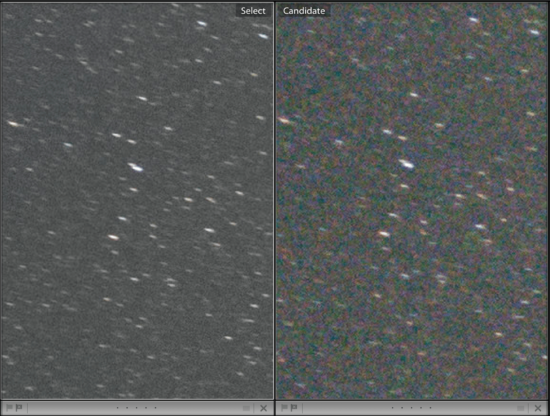 Original exposure on the right, and the stacked exposure created using Starry Landscape Stacker on the left using 8 exposures.

#6 – Using the software to noise reduction

Once you have your photo loaded into Photoshop, the Nik Collection “Dfine 2” tool is a great way to further reduce noise. Nik uses an advanced algorithm to reduce noise. This reduces the detail much less than a standard Photoshop noise reduction. If you find the effect to be too strong, simply lower the opacity.

Star tracking is a method that has greatly increased in popularity over the last few years. Simply put, a star tracker turns your camera at the same speed as the stars in the sky. This allows you to take super long exposures of the stars at low ISO values. When using a star tracker myself, I like to shoot 8 minute exposures at ISO 400, which creates a night photo that is nearly completely free of noise. 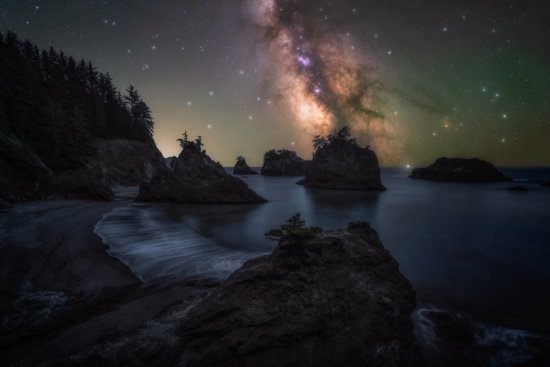 Another technique for shooting the night sky is star trails. Star trails show the full rotation of the stars for however long you decide to expose for. If you’ve ever seen a photo of the night sky where the stars circle around in giant streaks, this is star trail photography. This can be achieved two different ways.

The first way involves getting the trails all in one shot. To photograph star trails this way, you’ll need to leave the shutter open for hours at a time. The benefits of doing things this way is that you’ll only have one image at the end, so it won’t require a lot of post processing work. If your camera moves at all, or if light hits the camera, your shot is ruined. Even worse, leaving the sensor open for hours at a time can damage the sensor if it heats up too much. It can even produce hot pixels, which is noise produced from the sensor of the camera heating up.

The way I’d recommend you do it is by taking many 30 second exposures. If you shoot 30 second exposures with no time between shots, you’ll be able to achieve the same effect. Once you have the hundreds of photos at the end of your shoot, you’ll have to load them in Photoshop, and set the blend mode to “Lighten” on all of the layers but one. This will produce a starting point towards your final image, and you should see the star trails at this point. 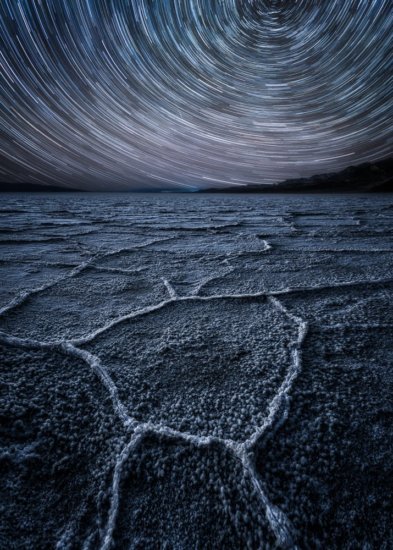 Night photography is a whole different beast. Although, once you figure it out you will find that it can be incredibly rewarding. On the nights where the sunsets are just too clear, you can stick around and shoot the night sky and still come away with stunning images. It’s easy to get discouraged with night photography, as it is much easier to make mistakes. However, after you try a few times, you’ll learn from your mistakes. With practice, you become an amazing night shooter, capable of creating stunning night photography.

How to correct colors in Lightroom for Travel Photography

A Beginners Guide to Aperture in Landscape Photography
Scroll to top