It’s almost common wisdom to say that night photography of star and Milkyway is best accomplished when there is no moon present. The light of the moon is very powerful and it can make all but the brightest stars invisible, especially when the moon is full and high in the sky.

It is certainly impossible to get a good photo of the Milky Way when the moon is visible. To capture the photo below, I checked the time the moon would set and went to the desired location shortly after that hour. The problem night photography like this is that there is no light to illuminate the objects on the ground. Personally, I have no interest in capturing photos of only stars. I am always looking for an interesting foreground to make a more compelling composition. 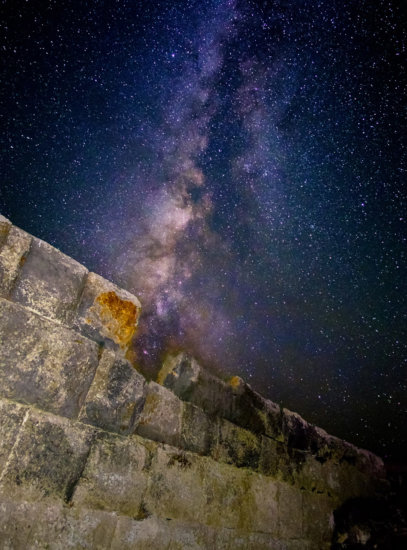 In the night photo above, the foreground is a section of a 3,000-years-old cyclopic wall on the island of Nisyros, Greece. In order to make it visible, I had to light-paint it with a flashlight.

I had a similar situation one night in Arches National Park. Without any added light, Balanced Rock was simply a dark mass under the starry sky, as you can see in the following photo.

The following is another photo taken the same night. The underside of Double Arch was painstakingly light-painted. With such a huge structure, it took numerous attempts to ensure it was lit as uniformly as possible. This was the best of a dozen exposures. With light painting, you don’t see what you’re doing until after the long exposure is finished. The process can be a bit of a hit-and-miss. 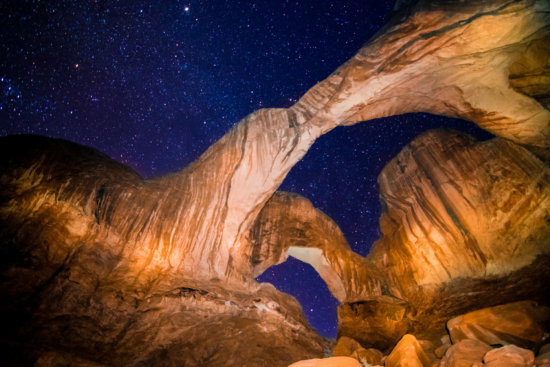 In other cases, you might have artificial light on the ground, like in the following photo of a resort in the middle of the deserts of Oman. With existing light, however, you generally have no control over it. Chances are that it is too bright.

In order to prevent the lights on the building to blow out, I used a 3-stop GND filter upside down. Even with this, the light is too harsh and creates a lot of glare.

Luckily for me, a few hours after this photo was taken, they turned off the lights. At that time, a half moon had risen and was throwing so much light on the ground that I could move around without a flashlight.

Here is the photo that I was able to capture shortly afterwards.

The Light of the Moon

While my eyes could only see in black and white, the light of the moon is just reflected sunlight, so it contains all the colors of the spectrum. Our digital cameras are perfectly able to record them all. What is especially nice about this situation is that the luminosity of the sky and that of the ground balanced out almost perfectly. I was able to render this scene by using one capture, with no filters and minimal post-processing.

For the sake of comparison, here is the original image, straight out of camera. Most of the time I spent at the computer was for cloning out the white car behind the building.

As you can see, even with the moon there are plenty of stars in the sky. Had the moon been full and at its zenith, this would have been different; but a half moon about 30° above the horizon was just perfect.

Night Photography Comparison: With & Without Moonlight

Finally, a comparison between two night photos I had taken in a nearby location one year earlier. These appeared in one of my previous articles on this website. One photo is taken with moonlight from the light of the full moon and the other after the moon had set. In the latter, I light-painted the tree. Obviously many more stars are visible, but I don’t think the photo is necessarily about the stars. It’s more about a lone, dead tree in the desert night, so I’m quite happy with both. Taking the former, however, was decidedly easier.

So next time don’t miss an opportunity to use moonlight in your night photography. ;)

When to break photography rules
Scroll to top