There are many things that the camera could not capture in this image. The sudden chill in the air as the eclipse reached totality. The sounds of birds chirping like it was sunset. The confused chatter of squirrels in the trees. The howling of distant wolves. There was even a cute little dog that came looking for his kayaking owner as if to tell him, “Daddy, it is time to go home!”

There were a few people on boats watching the glorious spectacle unfold and taking in the festive atmosphere. My friends hurriedly put on their jackets as the temperatures rapidly dipped. Stars and constellations, like the four-star system Regulus (which I captured), appeared in the sky.

What happened during those two minutes of totality cannot be adequately described by witnesses or appreciated by someone who was not in the totality zone. I was not prepared for what I experienced but I do want to experience it again and again if I am fortunate enough. A total solar eclipse is addictive. 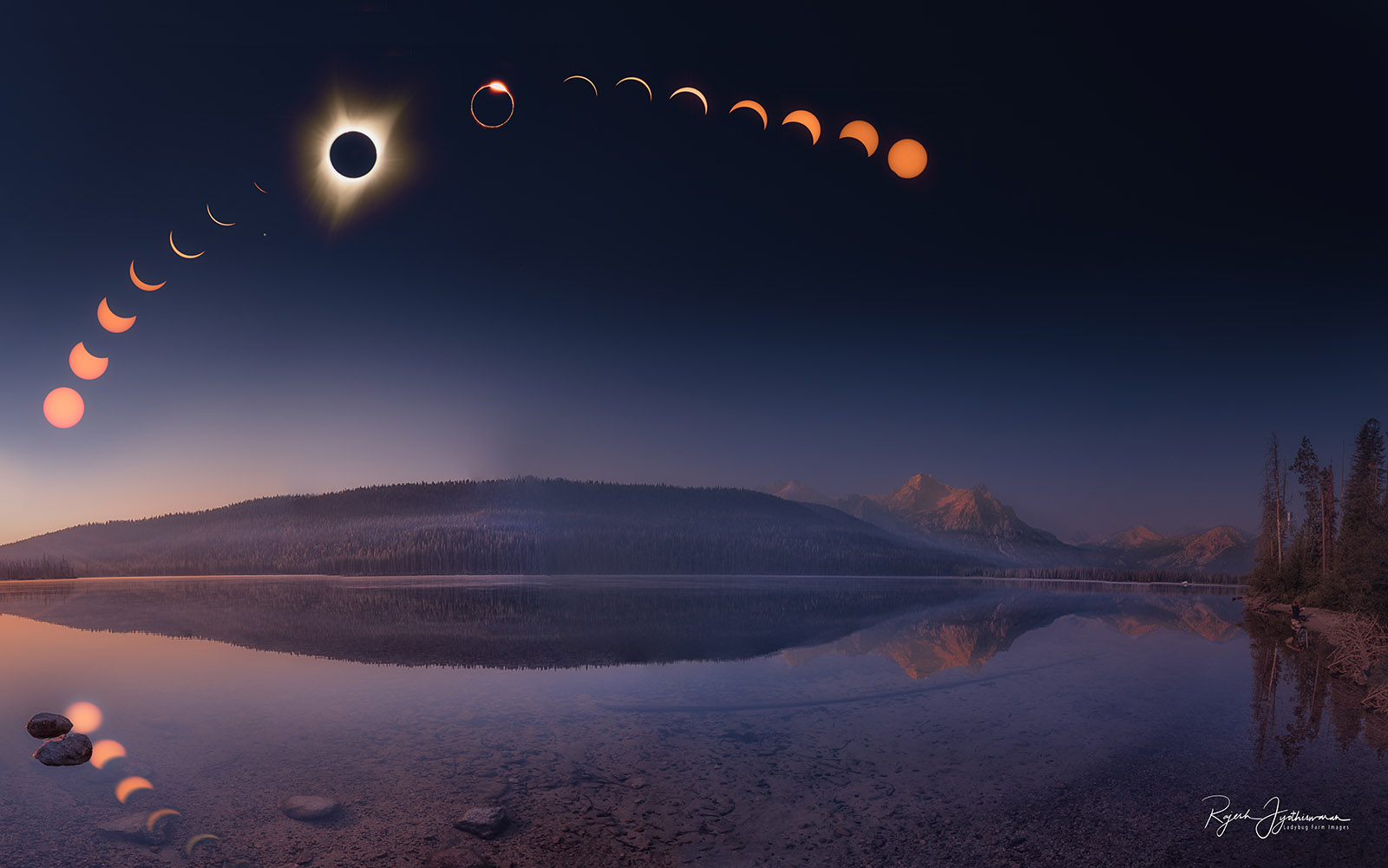 The Great American Eclipse: Composite created with 36 photos taken over a 3 hour period.

I must confess I have a love-hate relationship with composites. I have long-admired ones that are tastefully done but had never attempted one before. This was because of my own reservations on what is real and what is not.

However, the Great American Solar Eclipse of 2017 was the right opportunity to set aside my composite reservations. Given the high elevation of the sun, this eclipse presented a real challenge for a wide-angle landscape shot.

I did make one concession to myself. I would create a near real-time composite. This meant that all the individual exposures would be shot at the same spot and during the same event.

When a friend proposed traveling to photograph the eclipse, we decided on Idaho’s Sawtooth Mountains over the Oregon coast. I had experienced the infamous Oregon marine layer before and what it can do to the skies and photographer’s dreams. Also, the Sawtooth Range in Idaho was one of the few places in the narrow band of totality that had tall jagged peaks, mirror-like alpine lakes, glacial melt rivers, creeks, and other interesting features.

For this event, I envisioned a rugged western wilderness landscape with the eclipse phases in the sky representing, in one image, its essence. In other words, a time lapse condensed into a single picture.

To realize this vision, I needed a foreground that alone was worthy landscape subject. This eclipse would play a supporting role even though the eclipse was the real story. This is similar to a good Milky Way image with an interesting foreground element with the Milky Way in the background.

I planned to shoot the landscape at the crack of dawn. The first rays of the sun would come from the left and fill the foreground. Because the top half of the picture would remain darker than the rest of the frame,  the close-up eclipse shots would stand out better.  I would then stay at the same spot and shoot the eclipse with my telephoto lens to make the near real-time composite image.

Before arriving in Idaho, we used Google Earth to identify several potential locations. Upon our arrival, we scouted the Sawtooth mountain area for the perfect location with prominent foreground elements. Though Google Earth is helpful, the reality on the ground is never a 100% match for satellite pictures. Much to our disappointment, our most-preferred mountaintop location was inaccessible. We were not prepared for the long hike it would have required. Also, I did not want to be stuck in a place after a long hike if the weather conditions changed and the eclipse could not be viewed from there.

At each location, we checked Augmented Reality images on PhotoPills to verify the direction and elevation of the sun to ensure the compositions would be close to reality. After all, it wouldn’t make sense to have the morning sun display in the west instead of the east.

After scouting our candidate locations, we had an early dinner and then went to Stanley Lake to shoot the sunset and Milky Way. I photographed the sunset as a moose family decided to make an appearance in the marshes. We did not have much luck with the Milky Way as thick clouds rolled in along with smoke from a British Columbia wildfire. Thankfully, the clouds and wildfire smoke stayed away just long enough to not spoil our eclipse plans.

Because of the threat of impending traffic jams and the long drive, we decided to sleep in our cars in the Stanley Lake area rather than drive back to our hotel in Hailey, Idaho. The night was cold and none of us were prepared. In the wee hours of the morning, people started arriving to stake out positions to watch or photograph the eclipse. 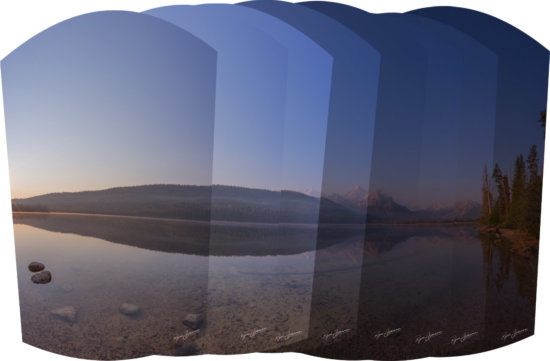 Some of the Pano Slices – American Eclipse Photo

As the sun rose above the horizon to my left, the McGowan and Elk peaks were bathed in a warm alpenglow. I used my Sony a7II camera and Sony Zeiss FE 16-35/f4 lens to shoot 16 vertical exposures in two rows. With the landscape portion taken care of, I stayed at the same spot and changed to my camera with a telephoto lens, the Sony SAL 70-400 G2 with LA-EA3 adapter. I also used a 1.4x teleconverter for the additional reach. I shot the eclipse in uncompressed RAW format with the Sony a7RII camera in APS-C mode yielding an effective maximum focal length of 840mm.

To minimize weight on this trip, I carried only my 3 Legged Thing Eddie travel tripod; a heavier, more stable one may have been a better choice. For the close-up eclipse shots, I also used a homemade solar filter with the Thousand Oaks Mylar solar filter cut and sandwiched between two UV filters. I triggered the shots with a wired remote shutter release.

I used Adobe Lightroom and Photoshop to process the landscape panorama. I individually processed, downsized, and blended the telephoto close-up shots into the landscape. This finished my real-time composite. In all, I shot 32 exposures over a three-hour period to create this final image.

Hope you enjoyed this short tutorials. Feel free to ask any questions in the comments below: 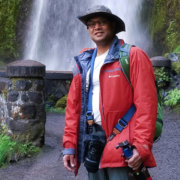 I am an accidental photographer. A chance realization of my own latent photography skills, when a smartphone photo of my native plant garden went viral on Facebook, led to the purchase of my first real camera, a crop sensor Nikon D7000. I shot my first RAW image of an emerging daffodil in Spring of 2015. Photography has taken me on a path of self-discovery, learning, and friendships across the world. My interests include anything that looks good through the viewfinder, though landscape and astrophotography in places rarely photographed get me excited the most. I suffer from GAS (Gear Acquisition Syndrome) with an ever-increasing collection of vintage manual lenses some of which are 60 years old.

I live in North Texas with my wife and two daughters who taught me the basics of composition and light. They continue to inspire me every day to be a better husband, father, and artist. I currently shoot with a Sony a7RII, Sony a7II, and a Sony a99. My goal is to continue growing as an artist and be a source of inspiration to others like several great photographers have been to me.

How to Edit Photos on the Road